Ruined facility not considered high risk so had no failsafe

Ruined facility not considered high risk so had no failsafe 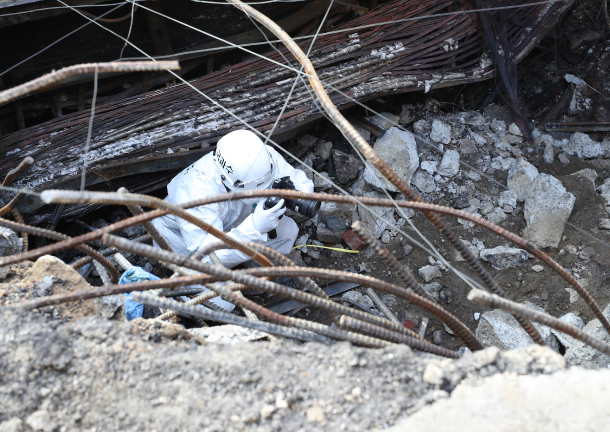 A member of the National Forensic Service conducts an on-site probe at the site of a blaze at KT’s building in western Seoul on Monday. [YONHAP]

It has become clearer than ever just how important telecommunications infrastructure matters to Korea after the recent fire that broke out at a KT facility in western Seoul.

Although a fire broke out in just one of KT’s hundreds of telecommunications switching centers nationwide, five major districts in Seoul lost phone connectivity and wireless internet. Even parts of Gyeonggi, close to Seoul, were affected by the fire.

How did KT’s Ahyeon switching station in Seodaemun District, western Seoul, affect so many people and create such widespread chaos?

The fallout is largely due to the Ahyeon building’s location and its role within the network. Though it was one of the major stations covering several central districts in Seoul and housed a huge amount of telecommunications infrastructure - 168,000 landline phone lines and 220 sets of fiber optic cables - it was only categorized at level D in terms of importance by KT and the government. 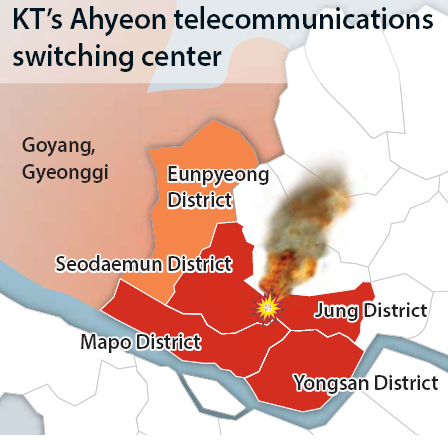 Bigger stations like its main telecommunications center in Hyehwa, central Seoul and Guro, western Seoul, cover services for a larger area of Seoul and are, therefore, categorized as level A facilities. These higher-level facilities are equipped with a system to reroute traffic even if an optical cable facility is damaged, according to Oh Seong-mok, president of KT’s network division, who spoke at a National Assembly meeting held Monday.

Rerouting traffic, a failsafe that level D facilities are not equipped with, would have kept all telecommunications systems on line.

“As for level A facilities, considered the most important, the telecommunications infrastructure, including the cables, are physically duplicated for such accidents like fires,” a spokesperson from KT said. “But that wasn’t the case for level D facilities.”

Carriers are not mandated to install expensive back-up systems for D level facilities like the Ahyeon building, and Oh said it is expensive and time consuming for carriers to build alternative infrastructure for every facility.

The Fire Services Act, which oversees fire extinguishing systems inside buildings, was also highlighted as another major reason the situation escalated.

Under the current law, sprinklers, fire alarm systems and fire extinguishers are mandated only in basement tunnels that are 500 meters (1,640 feet) or longer and are connected to various services such as water, electricity and gas. KT’s tunnel, however, didn’t house water, electricity or gas systems.

It was also only 150 meters in length, which meant it didn’t need to have a full fire extinguishing system in place.

On the day of the accident, a Saturday, there were only two employees at work to take care of the situation. This also delayed the response.

There were also only a small number of fire extinguishers inside the building to use. If the fire had been detected earlier, it could have been easier to suppress.

From the corporate customers’ side, it is safer to subscribe to multiple mobile carriers for electronic payment or internet payment systems, but not many do so as it costs twice as much.