From left: A hospital in Seoul notifies patients that the KT service outage is causing communications disruptions on Sunday. Tourists from Hong Kong are unable to use storage lockers at Hongik University Station in Mapo District, western Seoul, to store their luggage on Monday. [YONHAP]

The fire that broke out at KT’s Ahyeon telecommunications switching center in Seodaemun District on Saturday brought businesses and households in Seoul to a standstill over the weekend.

Mobile network services and payment systems were down, preventing consumers, businesses and police officers connected to the KT network from functioning normally.

“The KT incident in an ultra-modern city like Seoul holds serious implications,” said Seoul Mayor Park Won-soon when he visited the site of the fire in Seodaemun District, western Seoul, on Sunday morning. “This incident is a clear example of the risks that Ulrich Beck warns of in ‘Risk Society.’”

In the aftermath of Chernobyl, Beck, a German sociologist, warned that some of the greatest dangers in a modernized world would come from man-made accidents rather than natural disasters.

Risks caused by damage to police and hospital capabilities posed one of the greatest dangers from the telecommunications blackout.

Due to the network failure, police officers at stations located in the affected regions were unable to properly receive 112 emergency calls. As a result, local stations across Mapo, Yongsan and Seodaemun Districts dispatched police officers to the central Seoul Metropolitan Police Agency - where service had resumed - to handle cases reported in their areas and call their local stations with their personal phones to relay the information.

Hospitals that use KT’s telecommunications systems also suffered, with staff at Yonsei Severance Hospital - one of Korea’s largest medical centers - resorting to using personal smartphones to contact each other because office phones were running on the KT network.

The transport sector also struggled to cope with the outage.

The blackout made it difficult for consumers and workers to carry out basic activities and tasks.

“Our family uses KT’s Olleh services in Mapo District,” wrote one Twitter user on Saturday. “Our TV and internet doesn’t work, and I can’t access the bus timetable on my phone. The store I’m working at part-time can’t process payments either.” 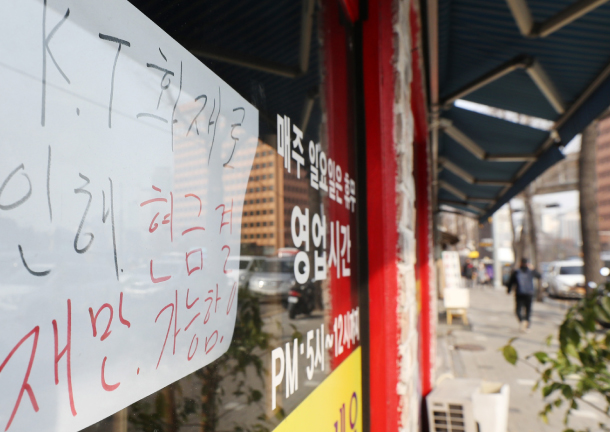 A store posts a notice on the window that it is unable to process card payments on Sunday. [YONHAP]

KT offers both TV and internet services on top of mobile plans, and many families purchase these services in a bundle to qualify for discounts.

Stores relying on KT could not process card payments or give KT membership benefits like reward points or discounts, even if customers paid in cash. The problem was exacerbated in some areas because retailers in the same commercial buildings often rely on the same telecommunications company.

“The Baemin Riders [people who deliver food for Baedal Minjok] who use KT worked in vain on Saturday,” said a rider for Baedal Minjok, Korea’s leading food delivery app. “We receive orders via app and call customers to let them know we’ve arrived, but without internet there’s no means for us to work.”

Baedal Minjok reported a 15 percent fall in orders on Nov. 24 compared to the previous Saturday. Many businesses are demanding that KT compensate them for losses in weekend revenue.

Two days before the fire at the KT office, a service failure in the Amazon Web Services (AWS) cloud network in Asia created havoc for businesses that host their online services on the system. Between 8 a.m. and 10 a.m. on Nov. 22, users were unable to access the websites and mobile apps of online shopping platforms like Coupang and Baedal Minjok.

AWS is responsible for around 80 percent of the cloud market in Korea.

In light of the successive IT meltdowns, experts advise that it’s important to prepare contingency plans to allow the government and companies to respond to unforeseen accidents.

“This incident serves as a bleak warning of how a hyperconnected world relying on ICT [information and communications technology] can easily fall apart,” said Suh Yi-jong, who teaches sociology at Seoul National University. “It’s important to come up with a strategy that can help us continue to maintain a high level of dependence on technology.”

Lee Kwang-hyung, a professor of bio and brain engineering at the Korea Advanced Institute of Science and Technology (Kaist), says the problem lies in the rapidly growing role of telecommunications technology in society.

“As a society’s telecommunication and IT infrastructure grows larger, it becomes more difficult for a single company or government to maintain control,” said Lee. “It’s important to create a system that modularizes the infrastructure and is capable of quickly addressing problems to minimize negative ripple effects.”