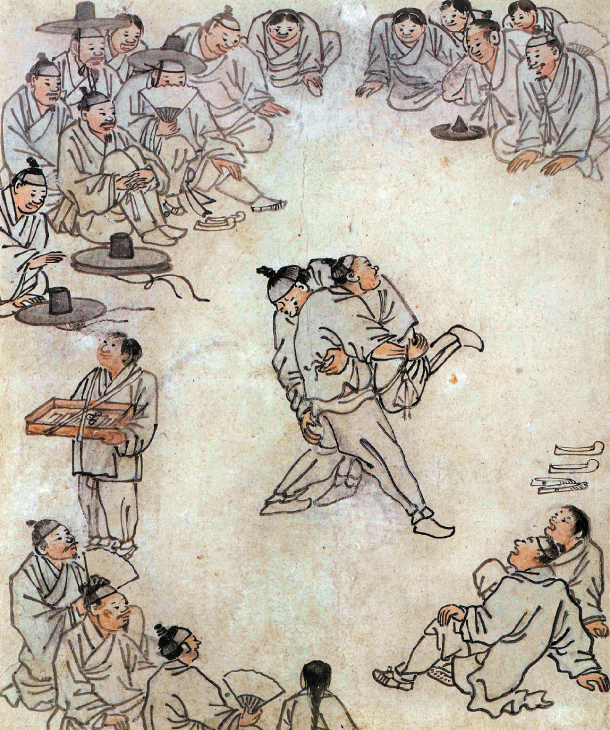 Part of the painting “Ssireum” by Joseon-era (1392-1910) artist Kim Hong-do (1745-1806) from the Album of Genre Paintings, depicts a scene in which two wrestlers are encircled by spectators largely divided into two groups. On Monday, ssireum, or traditional Korean wrestling, became the first Intangible Cultural Heritage of Unesco jointly registered by South and North Korea. [JOONGANG ILBO]

Unesco’s 13th session of the Intergovernmental Committee for the Safeguarding of the Intangible Cultural Heritage, which kicked off on Nov. 26 in Port Louis, Mauritius, held an emergency meeting on Monday morning, and made the unprecedented decision to accept and recognize the traditional sport submitted by a combined bid.

According to South Korea’s Cultural Heritage Administration, the discussion of whether to combine the application or not was on the table for the first day of the meeting and the announcement was set to be made later in the week. However, all 24 participating member countries unanimously agreed to accept the joint registration and make an early announcement of the recognition, according to the administration.

A combined registration is not uncommon for other countries who share similar cultural traditions. For example, Cyprus, Croatia, Spain, Greece, Italy, Morocco and Portugal jointly applied to inscribe the Mediterranean diet, which was registered in 2013.

But because of the unique relationship the two countries have - being technically at war since the Korean War (1950-53) - this joint registration, which comes amid an ongoing atmosphere of reconciliation, is being seen as greatly significant.

So far, the two countries have been in competition to add items to the list. The two Koreas currently have two of the same cultural traditions separately registered on the list. South Korea inscribed the famous folk song “Arirang” on the list in 2012 and North Korea listed the same song two years later.

The culture of making and sharing kimchi was also recognized as an Intangible Cultural Heritage of South Korea in 2013, while North Korea’s kimchi-making culture was granted the honor in 2015.

According to the Cultural Heritage Administration, South Korea made the bid to register ssireum in March 2016, while North Korea registered it in March 2015.

However, after failing to make the list, North Korea revised their documents and applied again last March.

Unesco explained that they made the unprecedented decision as the two Korea’s ssireum share similarities and that both Koreas wanted to merge the application.

With the registration of ssireum, South Korea has 20 items on the Unesco’s Intangible Cultural Heritage list while North Korea has three.

Ssireum is one of Korea’s oldest traditional sports which dates back to the Three Kingdoms period (57 B.C.-A.D. 668) and is still practiced today, especially during the Chuseok (harvest festival) and Seollal (Lunar New Year) holidays.

According to the Cultural Heritage Administration, the sport’s deep-rooted tradition and the fact that it remains popular today contributed to it being recognized and registered as an intangible cultural asset.