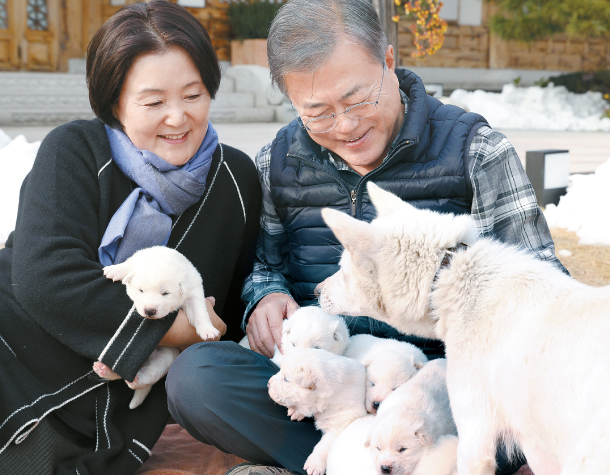 That’s not going to happen, a top aide to Moon stressed on Monday.

A day after the Blue House revealed photos of the six new presidential pets, a core member of Moon’s inner circle told reporters that the puppies have been classified as national property. This means they can’t be sold to the public and that Moon cannot take them home when he leaves the Blue House.

The source, who spoke on the condition of anonymity, said the Blue House had a long discussion on the fate of the two Pungsan-breed dogs Kim gave to Moon in late September during their third summit. They decided to designate them as national property, as well as their puppies.

The eight dogs now live with Moon at the Blue House in Jongno District, central Seoul. They will probably be sent to some sort of a “national institute” in the future, said the official, without elaborating further.

On Sunday, Moon’s office revealed photos of Moon and first lady Kim Jung-sook looking after the six puppies on the Blue House front lawn after Gomi, the female dog given by Kim Jong-un, gave birth.

Along with a male Pungsan dog named Songkang, Gomi was given to Moon by Kim as a gift when the South Korean president visited Pyongyang from Sept. 18 to 20 for their third summit. The Blue House said Gomi gave birth on Nov. 9, which indicates she was probably pregnant when Kim handed her over to Moon, given the gestation period for dogs is approximately two months.

Moon now has 11 pets, including the two dogs from North Korea and their puppies. When Moon entered the Blue House in May 2017, he took with him two dogs and a cat he already had. Blue House officials say Moon has been paying for his three pets’ food even after becoming president, but that the eight additional dogs will be supported with tax money because they are national property.

A look back at the history of presidential pets offers some clues as to where the North Korean canines might end up.

Shortly after former President Lee Myung-bak entered the Blue House in 2008, he started raising three deer on the presidential compounds. After five years of mating, 26 deer lived at the Blue House. Some Blue House workers vented frustration about the deer rummaging through garden beds and defecating on the grounds.

In March 2013, when Park Geun-hye became president, all of Lee’s 26 deer were moved to Seoul Grand Park in Gwacheon, Gyeonggi. The park later announced that they were sold to a private farm, but very little is known about where they are today, or whether they are still alive. Lee took his dog back home. Two other dogs that were given to him after he became president were both sent to a local zoo during the Park Geun-hye administration, Blue House officials said at the time.

Park raised 12 dogs in the Blue House, starting with two Jindo dogs she received right after becoming president from residents living near her private home in Samseong-dong in Gangnam District, southern Seoul. In 2015, her female Jindo dog gave birth to five puppies, after which they were all given to members of the public. In 2017, five more puppies were born.

After Park was impeached in March 2017, three Jindo dogs were given to members of the public and four were sent to a non-profit association for preserving Jindo breeds.