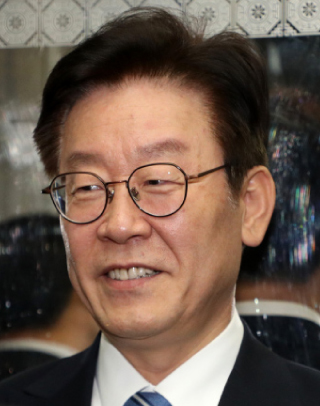 “In life and in death, Gov. Lee will be a Democratic Party member,” said Gyeonggi Provincial Government Spokesman Kim Yong on a CBS morning radio program. “There won’t be a case where Gov. Lee quits the party or harms the Moon Jae-in administration.”

Despite resistance on Lee’s part, voices within the party calling for his removal grow louder by the day as a series of scandals continued to tarnish the governor’s image.

Lee went through a 13-hour interrogation at the Suwon District Prosecutors’ Office on Saturday over accusations that he forced his older brother into a mental hospital as the mayor of Seongnam, Gyeonggi. His wife, Kim Hye-kyung, has also been identified by police as the owner of a Twitter account used to spread false rumors about his former political rivals, including President Moon.

The governor stoked controversy even further last Friday when he brought up allegations of nepotism in the hiring of the president’s son, Moon Joon-yong, in a Facebook post.

“Both myself and my wife, and a lawyer are certain Moon Joon-yong’s hiring scandal is a false accusation,” the post read. The accusation that the president’s son landed a full time job at a state-run institute in 2006 thanks to his father’s influence was effectively dismissed in July last year as a political smear by the Ahn Cheol-soo campaign during last year’s presidential election. While Lee’s ostensible purpose in bringing up Moon’s case on Facebook was to argue that his wife is also a victim of false charges, DP members loyal to the president accused the governor of grandstanding.

On JTBC’s popular political TV show “Battle of Tongues,” DP Rep. Rhee Cheol-hee, one of the show’s two panel members, said Lee appeared to be exploiting a divide between pro-Moon and non-Moon factions within the party, a move he called “very dangerous.” Rhee then said Gov. Lee should leave the DP on his own account.

Lee’s spokesman said the governor received enormous backlash after putting up the post, and tried to step back from the controversy by saying the comment shouldn’t be interpreted loosely. In midst of the gathering storm, party leaders are biding their time when it comes to the scandal-ridden governor. In a press conference last Friday, DP chairman Lee Hae-chan said “it is not yet the time to make an official decision,” and that they would wait for the outcome of investigations by police and prosecutors as well as court rulings.

It is unclear how long they will be able to afford to delay the decision given that the party and administration’s approval ratings have been rapidly dropping in recent weeks. The president’s support reached a record low of 52 percent this week, according to a CBS poll, and the ruling party’s support fell to 39.2 percent.

Pundits have suggested that Lee’s attempts to open old wounds within the ruling party may be a last-ditch attempt to rally party members from outside the president’s faction to his side as opinion leans toward his ouster.