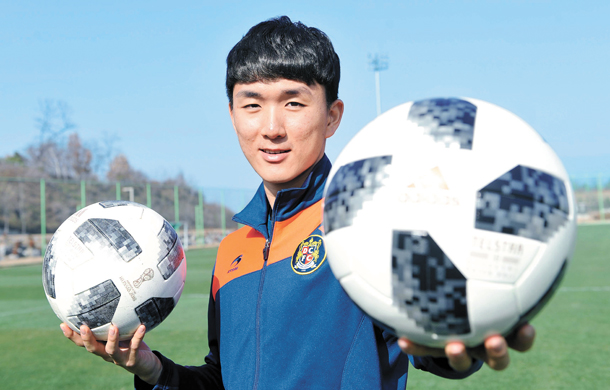 Hwang In-beom of Daejeon Citizen FC pose for a photo at Deokam Football Centre in Daejeon on Monday. [KIM SUNG-TAE]

There were concerns ahead of the Korean national football team’s November friendlies in Australia that the team would struggle without key players like Ki Sung-yueng and Son Heung-min. Those worries didn’t last for long, as Ki’s boots were quickly filled by Hwang In-beom.

After helping Korea to a 1-1 draw against Australia on Nov. 17 and a 4-0 victory against Uzbekistan on Nov. 20, Hwang is being celebrated as the next Ki.

Ki, the former captain of the Korean national football team, is considering retirement from the national team after the Asian Football Confederation (AFC) Asian Cup in January. Originally, he mentioned retiring after the FIFA World Cup in June, but postponed the decision after head coach Paulo Bento was appointed in August.

“Sung-yueng is my role model,” Hwang said. “I still have a long way to go to catch up with him. I said I’ll help Sung-yueng retire earlier because after spending time with him, Koo Ja-cheol and Lee Chung-yong, I learned how hard they have worked for the national team throughout the years, despite their injuries. The only way for them to rest is for us, the younger players, to play better. That’s why I made that comment.”

Hwang regularly make long passes like Ki, but he has a slightly different style of play, preferring to make short passes and create more room.

“The short passes allow me to find my rhythm and tempo in the match,” Hwang said. “But I like making forward passes to the strikers at the front.”

Hwang made his professional debut by signing with Daejeon Citizen FC of K League 2 in 2015. After playing three seasons with Daejeon, Hwang started his military service by joining the police club, Asan Mugunghwa of K League 2, in December 2017.

Hwang was added to the U-23 Korean national football team’s roster to compete at the 2018 Asian Games in Jakarta, and that’s when things started to change. By winning gold at the Asian Games, Hwang quickly caught the attention of the new senior national team head coach Bento.

Hwang didn’t need much time to prove Bento was right to trust in him as he scored his first goal with the national team during Korea’s friendly match against Panama in October. In six caps, Hwang scored one goal.

In addition to making his senior national team debut, Hwang was given another reward with his Asian Games gold medal - an immediate discharge from the police club. In September, Hwang was discharged by Asan Mugunghwa, and since then, he has returned to Daejeon.

“I’ve been spending a lot of time weight training, but there’s a limit in becoming a bigger and stronger player,” Hwang said. “So I’m trying to play smarter without getting in too much physical contact. But I won’t try to avoid it.”

As Hwang has been continuing to make more appearances in senior national team matches, there were reports on Nov. 22 that German football clubs are interested in him. Hwang said there weren’t any specific offers.

“There haven’t been any specific offers yet,” Hwang said. “But I did talk to [Hwang] Hee-chan [of Hamburger SV] about how I need to get out to the European league to further develop into a better football player. One day, I want to play in the European league and compete against the world’s best players.”

Although Hwang hopes to play in Europe as a long term goal, he’s focused on Daejeon for now. The team is currently ranked fourth in the league with 15 wins, eight draws and 13 losses.

“For now, my goal is to get back to Daejeon and help the team get promoted to K League 1,” Hwang said.

Hwang will be back in action with his K League club during a semifinal match against Gwangju at Daejeon World Cup Stadium tonight at 7 p.m.