Keith Haring’s whimsical activism: The artist aimed to bring art into the streets during the struggles of life in 1980s New York

Keith Haring’s whimsical activism: The artist aimed to bring art into the streets during the struggles of life in 1980s New York 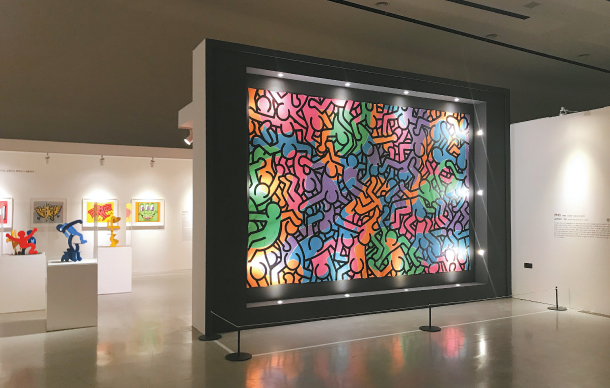 Though Keith Haring did not live long and his name may be unfamiliar to those outside of the art world, many people might recognize his bold-line paintings that look like graphic icons or scenes from a cartoon strip. Through his use of simple lines and colors, Haring’s goal was clear: to bring art into people’s lives.

The artist’s decade-long career as a pop artist began in the early 1980s when he took to the subways of New York to use empty advertisement boards as his canvas for his on-the-spot paintings. Works from that time and the rest of his prolific career, including pieces he made just months before his death, are now on display at the newly-opened “Keith Haring: Art is Life, Life is Art” exhibit at the Dongdaemun Design Plaza (DDP) in central Seoul. The show features 175 works made by Haring during his brief and brilliant lifetime.

To celebrate what would have been Haring’s 60th birthday, the Nakamura Keith Haring Collection has chosen to display more than half of the Haring works owned by Kazuo Nakamura, director of the collection. The Nakamura Collection is the only museum in the world dedicated to preserving and exhibiting the works of Haring, a “forerunner of American contemporary art,” as described by the museum.

“Keith Haring was active in the 1980s, when the United States was at a state of great social turmoil,” said Nakamura. “What makes him such a great artist is that he successfully brought art out into the streets. I believe that his works are a true representation of visual communication. His works first make you smile, and you can’t understand what’s going on at first. But then the longer and closer you look, you see that there is something there. I believe that is the power of art.”

Divided into nine sections, the exhibition follows Haring’s life in chronological order, beginning with his on-the-spot subway murals. Using white chalk on a black board, he would take about 40 minutes everyday leaving drawings on advertisement boards left empty in subway stations from 1980 to 1985. He dedicated himself to bringing art closer to everyone’s life, in the literal sense. “For Haring, they were the best canvases,” said Kaoru Anase, the chief curator of the exhibition. 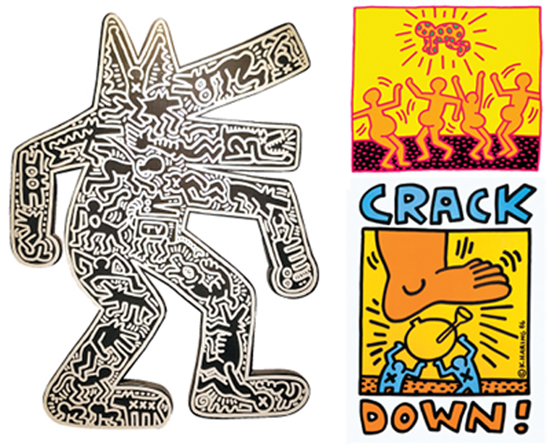 The “Keith Haring: Art is Life, Life is Art” exhibition features works by renowned pop artist Keith Haring that are both familiar and lesser-known. Above is “Dog” (1986), a silkscreen on wood, that takes its image from primitive drawings. At right, top, is “Untitled,” (1983) which depicts pregnant women and a poster reading “Crack Down” (1986). [YOON SO-YEON, SEOUL DESIGN FOUNDATION]

The exhibition continues on to his later works that are more familiar to the public, such as his poster series and icon series. Without any words, Haring’s paintings speak to the audience, with every person deciphering his messages from a different perspective, such as with “Untitled” (1985), a colorful 4-meter (13.1 feet) long acrylic and oil painting. The work is untitled like many of his other works in the hopes that people will use their imagination to figure out what the people are doing within the painting. “Who are they? Are they fighting? Are they dancing? Are they preparing for a festival? You have to figure it out on your own,” said Anase.

The unknown identity of the characters in his works - the ambiguity of their gender, race, age and all other physical features - are part of his message, to relinquish discrimination of any kind.

In the final parts of the exhibit, titled “The end of the beginning,” are 17 silk-screens hanging in a dark room that were created just a month before his death from AIDS. The works show his message with wit and humor. The original paintings were made in 1980, but he made the replicas from photographs he had taken, with the whereabouts of the originals unknown to even Haring himself. Just a month before his death, Haring looked back to the first moments of his artistic life, through which he depicted life, death, hate, love and everything else people come across but choose to turn away from.

“Most of you, when you hear his name, will think of vivid colors and happy images. But with this exhibition, we wanted you to discover the other side of the artist. With his visual messages, he talked about the chaotic 1980s during the Reagan administration. And though it’s been almost 20 years since his death, his message of social activism still lives on.”

The exhibition runs until March 17 at DDP.