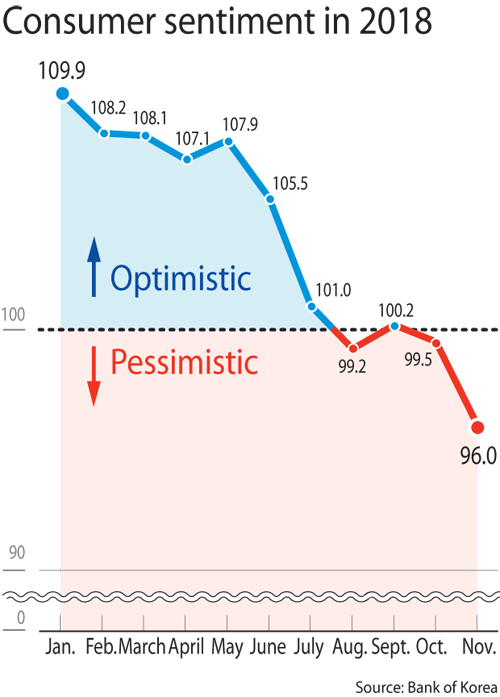 Faced with worsening employment conditions and dim growth prospects, Korean consumers are increasingly negative about the outlook for their incomes and the economy in general.

Consumer sentiment in the country dipped to a 21-month low in November, the lowest level since February last year, according to the central bank on Tuesday.

The Bank of Korea (BOK) said that the composite consumer sentiment index (CCSI) for this month stood at 96, down 3.5 points from the previous month.

A reading above 100 points indicates that a majority of survey participants have a positive outlook on the national economy, while a reading below 100 indicates that most have negative views.

The BOK mentioned that the public’s concerns center on an economy that is losing momentum and the possibility of a protracted downturn.

“People are worried that the country’s economy will enter a downward cycle. The ongoing trade war between the United States and China and the tepid jobs market are also contributing to the pessimism,” a bank official said.

A widening income gap has weighed on consumer sentiment. The gap was reported earlier this month at its widest in 11 years.

With the weak economic indicators, major international institutions have lowered their estimates for the economy both this year and next year.

Moody’s anticipates 2.5 percent growth this year and 2.3 percent next year.