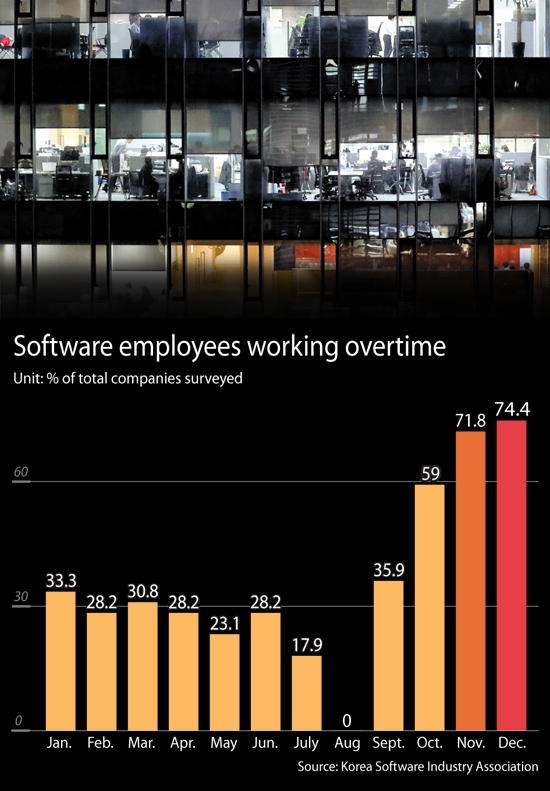 Employees work late at night in an office building in Seoul. There has been growing demand from the IT industry that the selective working hours be less restrictive. [JOONGANG ILBO]

An IT services company team leader, who wishes to be known only as Mr. Kim, has been racking his brain. He is trying to figure out how to meet the deadline on a web portal project he has been supervising.

Although now is the busiest season in the IT industry, he has no choice but to force one of his key staff members to go home, as the employee has already worked 60 hours a week over the last two weeks. He is over the limit allowed by law.

“Because we’re in the final stages, we are constantly getting calls from our clients, but we aren’t able to properly meet those demands,” Kim said.

Kim is not the only person in the local IT industry faced with problems as working hours at companies with more than 300 employees have been reduced since July from a maximum of 68 a week to 52.

The local IT industry is notorious for overtime, with many young employees burning the midnight oil, and November and December are considered the busiest months of the year in the sector. After the introduction of the 52-hour workweek, some IT companies have been unable to fully utilize manpower in meeting deadlines.

While both systems allow employees to choose the hours they prefer to work within 52-hour workweek limit, the main difference is that the selective working-hour system is less restrictive. Workers can adjust their schedule throughout the month and only have to meet the 52-hour limit on average over the month.

The selective working-hour system “in theory allows employees to work as much as 20 hours a day,” said Lee Dong-hee, a business administration professor at Kookmin University. “However, the average working hours in a month should still meet the 52-hour workweek requirement,” Lee said.

He said many knowledge-based companies don’t follow standard schedules and have work piling up ahead of deadline. They prefer the selective working-hour system.

The problem is that hours are averaged over a one-month period, shorter than the three months under the flexible working-hour system.

One month is not a lot of time given that major IT projects require roughly two to three months of highly-focused work. It is especially problematic toward the end of the year when public project deadlines are concentrated.

“November and December are also busy months for game companies as they need to finish the upgrading of games ahead of winter break since many of the gamers are students,” said a game industry official.

In a survey conducted by the Korea Software Industry Association in March this year, 71.8 percent said their employees work overtime in November, while 74.4 percent said the same for December.

Under the current system, if the employees work intensively for two weeks, the company has no other choice but to send them home early for the next two weeks to meet the one-month 52-hour workweek average.

“The limited time period was set without properly understanding the industry’s situation,” said Sung Wook-joon, a professor at the Seoul National University of Science and Technology’s Graduate School of Public Policy and Information Technology.

A 38-year-old employee of a mobile game developer worked last week from 10 a.m. to 4 p.m. The employee, named Lee, said he was forced to work shorter hours last week because he worked from 10 a.m. until 11 p.m. the previous two weeks.

“Because teams specialize, other teams cannot do the work we are doing,” Lee said.

The political parties and the labor community have been mainly focused on negotiating the flexible working-hour system and have not given enough thought to expanding the selective hours.

In July, Choo Kyung-ho, a Liberty Korea Party lawmaker, proposed a reform bill that would expand the current one-month limit to three months, giving more room for employees in the IT industry to adjust their working hours. But no progress has been made since.

Some worry that expanding the period in which average working hours are calculated could lead to overwork, which could threaten the health and well-being of young people at IT companies.