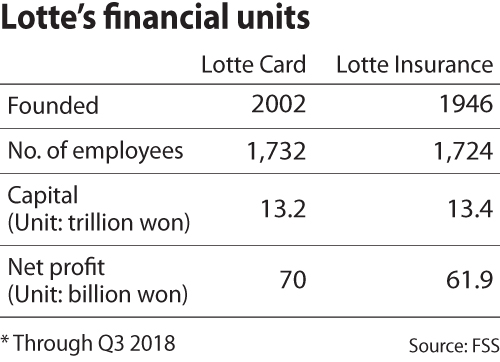 Lotte Group will pull the plug on its financial businesses as the retail-focused group is required by law to sell its controlling stakes in insurance and card affiliates as part of a corporate governance switch into a holdings company structure.

The heads of Lotte Insurance and Lotte Card sent a message to employees through a company-wide bulletin board on Monday to announce the sale decision, pledging to do their best to secure all employees’ positions and benefits.

“Lotte has come to a decision to sell Lotte Card and Lotte Insurance to comply with the law that industrial holdings units are not allowed to control financial companies,” the group said in a statement.

Under the Fair Trade Act, Lotte Group is required to offload its stakes in the financial affiliates by October 2019.

The initiative to create a more transparent management structure came about in 2015 when Chairman Shin Dong-bin and his estranged older brother Shin Dong-joo began a bitter ownership battle over the group’s Korean business.

Lotte Corporation holds a 93.8 percent share in Lotte Card, while Lotte Insurance is 53 percent owned by the group’s key affiliates including Hotel Lotte.

The two companies happen to be comparable in terms of the number of employees and financial records.

As for capital, the card affiliate holds 13.2 trillion won ($11.7 billion) and the insurance company 13.4 trillion won as of the third quarter.

With their relatively small size, the two are not considered top-tier players in the industry, making some insiders doubtful about the prospects of the sale.

“We all know that the reduction of commission fees will hurt the business and profit of the card company,” said a source at a major financial company who requested anonymity.

“So, that makes buyers more cautious to throw their hats into the ring,” the source said, “Moreover, Lotte Card itself is far from a major player and has a relatively small client base.”

Despite the skeptical views, some market observers predict that Lotte Card could be a good fit for Woori Bank because the company is on track to change into a holding structure to strengthen its non-banking businesses.