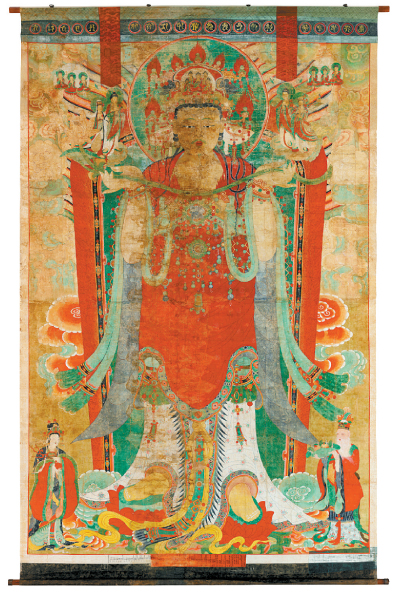 The so-called Silla’s Smile, a human face roof-end tile from Gyeongju, North Gyeongsang, along with five other items, were named treasures by the Cultural Heritage Administration on Tuesday.

The six items include the hand-carved convex roof-end tile that was excavated from the site where Yeongmyo Temple stood during the Japanese colonial period (1910-45); as well as three gwaebul, or Buddhist paintings; a bronze gong of Gyeongseon Temple used for the Buddhist temple’s rituals; and the Certificate of Meritorious Subject issued to Jang Cheol (1359-99), who rendered distinguished services during the first rebellion of the princes in 1398.

“It’s the first time that a roof tile has been designated a treasure,” explained an official from the administration, saying that it represents the outstanding tile-making skills of Silla (57 B.C.-A.D. 935).

The roof-end tile, or sumaksae in Korean, is a convex-shaped tile that gets attached to a curved tile at the edges of a roof. A smiling human face is engraved into this sumaksae - a custom during this period - instead of a fierce-looking face, to soothe the evil spirits and send them back to where they came from.

According to the administration, a Japanese doctor named Toshinobu Tanaka purchased the tile at an antique shop in Gyeongju in 1934 and took it outside the country, but the tile managed to come back home in 1972 following the then-government’s attempts to bring archeologically significant cultural assets back to Korea. The tile is now catalogued as Korea’s Treasure No. 2010. 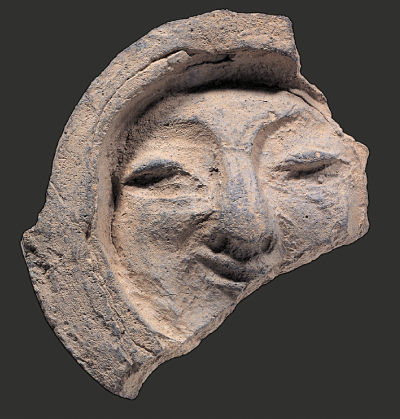 Six cultural artifacts have been designated as Treasures by the Cultural Heritage Administration including the human face roof-end tile of Gyeongju (No. 2010), above, and a Buddhist painting known as gwaebul from the Beopju Temple in Gunwi, North Gyeongsang, left (No. 2005). [CULTURAL HERITAGE ADMINISTRATION]

The last gwaebul is especially large, more than 10 meters (32.8 feet) high, and features Sakyamuni in the center. The painting is regarded as one of the most important late 18th century North Gyeongsang Buddhist paintings.

“We’ll work closely with concerned governments and management bodies so that the newly designated treasures can be systematically preserved and utilized,” said an official from the administration.