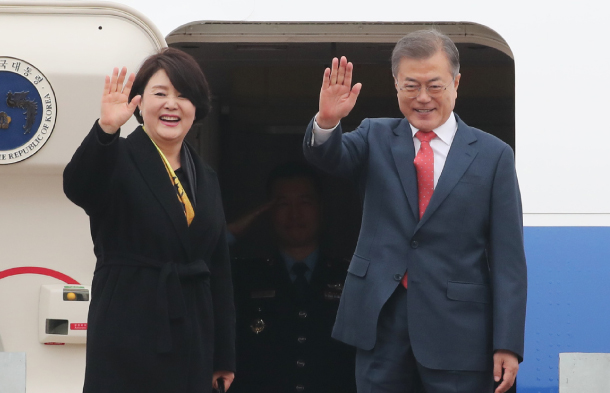 President Moon Jae-in left for an eight-day trip to the Czech Republic, Argentina and New Zealand on Tuesday.

Moon is angling for a bilateral meeting with U.S. President Donald Trump on the sidelines of the G-20 Summit in Buenos Aires.

A meeting between Moon and Trump hasn’t been fixed yet, and talks between the two allies on holding one are still ongoing, a high-level Blue House official said on Tuesday on the condition of anonymity.

If they do meet, it will be their sixth summit.

“It’s hard [to schedule a summit between the two leaders] because President Trump is staying in Argentina for such a short time,” said the official. “But we’re trying our best to accommodate our schedules. I think a final decision will take more time to be reached.”

Blue House officials hope that a Moon-Trump summit will breathe fresh air into stalled denuclearization talks between Washington and Pyongyang and add momentum to discussions between Pyongyang and Seoul on North Korean leader Kim Jong-un’s visit to Seoul this year.

Both Korean leaders agreed in their third summit on Sept. 19 that Kim would visit the South Korean capital by the end of 2018, but related talks have yet to begin. On Monday, Moon’s aide said that the South Korean government was still hoping that Kim will visit Seoul this year but that “it appears it’s not going to be easy.” Even though Moon publically said early this month that he hoped Kim visits him soon, the North still hasn’t reached out to Seoul to discuss the matter, Blue House officials say.

Blue House spokesman Kim Eui-kyeom said on Monday that the government was discussing “various” scenarios on Kim’s visit, adding that now was a “crucial time” to decide which would be more effective for bringing peace and prosperity on the Korean Peninsula: Kim visiting Seoul before the second North-U.S. summit or after.

If Kim visits after a second North-U.S. summit, he will visit South Korea next year, given that Trump said he was looking forward to meeting Kim after Jan. 1, 2019. This was the first time the Blue House openly raised the possibility that Kim could visit Seoul next year.

Moon left Seoul Air Base in Seongnam, Gyeonggi, on Tuesday afternoon for the Czech Republic.

During his two-day stay there, Moon will hold a summit with Prime Minister Andrej Babis and talk about bilateral cooperation in the construction of nuclear power plants in the European country, a Blue House official said.

Moon will then fly to Buenos Aires to attend the G-20 Summit, where he will promote his core economic policy of “embracement,” the pursuit of economic stabilization for society’s vulnerable members. Moon is also scheduled to hold separate bilateral summits with the leaders of Argentina, the Netherlands and South Africa on the sidelines.

The South Korean president will then visit New Zealand on Sunday for a state visit with Prime Minister Jacinda Ardern and Dame Patsy Reddy. Moon will return home next Tuesday.