Antarctic expeditions, preserved in the cold: Exhibit in Busan looks at history of exploring the barren South Pole

Antarctic expeditions, preserved in the cold: Exhibit in Busan looks at history of exploring the barren South Pole 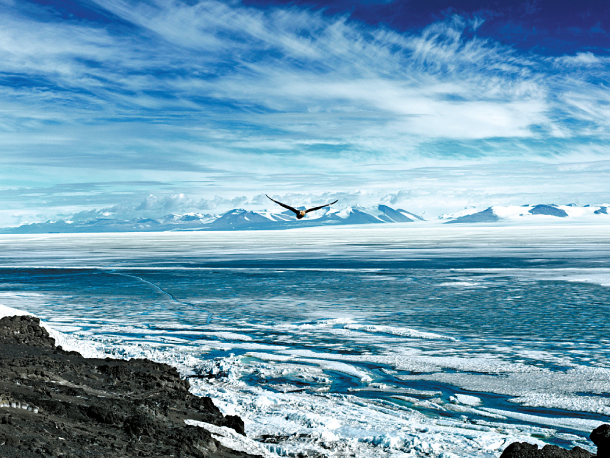 A photograph of the South Pole by Jane Ussher on display at the “Antarctic Still Life, History and Heritage” exhibition that kicked off on Nov. 27 at the Korea National Maritime Museum in Yeongdo District, Busan. [ANTARCTIC HERITAGE TRUST]

BUSAN - Located in the south of the peninsula, Busan usually remains one of the warmest areas of the country when winter arrives. But with the opening of an exhibition titled “Antarctic Still Life, History and Heritage,” at the Korea National Maritime Museum, which sits on the edge of the city’s island Yeongdo District, that may no longer be the case.

Walking into the exhibit, visitors will feel as if they are in the South Pole as the museum decided to work closely with the Canterbury Museum and the Antarctic Heritage Trust in Christchurch, New Zealand, to give visitors the opportunity to learn more about the icy continent at the bottom of the globe. The exhibit runs until March 3.

Still life images of the Antarctic, taken by New Zealand photographer Jane Ussher, welcome visitors when they first enter the exhibit. She took the photographs in 2008 during her first expedition to the region to document the three Heroic Age (1895-1917) huts that still stand on the Antarctic’s Ross Island.

Then, visitors are ushered into a small black room where they can enjoy the “Still Life immersive experience created by Jane Ussher and Antarctic Heritage Trust.” It is a 10-minute audio-visual immersive experience exploring the three huts constructed more than a hundred years ago by Antarctic explorers Captain Robert Falcon Scott and Sir Ernest Shackleton.

The homes of the explorers have been left unchanged for over one hundred years. Thanks to the below-zero temperatures and the lack of bacteria in the Antarctic, the huts, as well as the objects inside them, were preserved without suffering any damage. Ussher used special techniques to document the huts so that people who can’t access the Antarctic themselves can at least have an immersive experience of what it’s like on the ice and inside the huts. 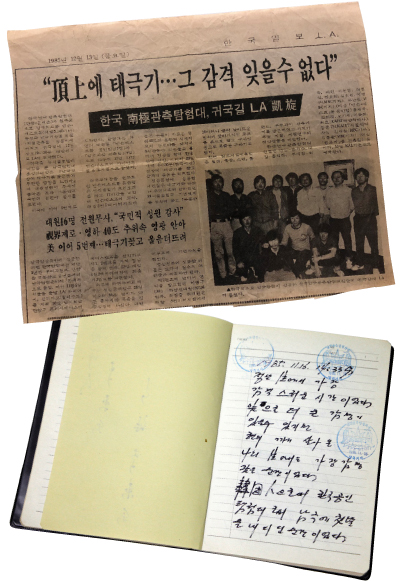 Top: A newspaper article about the Antarctic Observatory Expedition of Korea’s successful completion of their mission - climbing Vinson Massif, the highest mountain in the Antarctic - published on Dec. 13, 1985. Above: An Antarctic expedition journal belonging to Lee Dong-hwa. [YIM SEUNG-HYE]

“The huts where Scott’s and Shackleton’s expedition teams stayed imbue a uniquely dull and barren ambience formed through harsh climate and tumultuous years,” said Lee Sang-hyun, senior curator of the exhibition. “The eerie atmosphere where the dark walls are covered with sea blubber and the cold and quiet bases, embedded with sad stories of what might be the most still and desolate place on the earth, make people emotional.”

That is why the museum decided to call these images, as well as other objects from the expedition on display, “Still Life,” explained Lee.

“Various survival objects discovered in the huts, expeditionary and training journals vividly tracking the activities of Antarctic explorers from Korea that are housed at the museum and letters of commitment pledging one would sacrifice their life while on their Antarctic expedition might be dubbed as ‘Still Life’ in the Antarctic,” Lee said.

“And the continuum of the still life is ‘History’ inscribed in Mother Nature inviting humans over and the historic ‘Heritage’ of the Antarctic.”

The second half of the exhibition shows “Koreans’ Desire for the Antarctic.” Korea first conquered the South Pole on Jan. 11, 1994, after a 44-day journey on foot by a team led by Captain Huh Young-ho. Another Korean team, led by Captain Park Young-seok, arrived on Jan. 13, 2004. Moreover, this year marks the 30th anniversary of Korea’s Antarctic King Sejong Station on King George Island.

This section of the exhibit attempts to help visitors learn more about Korea’s expedition to the Antarctic and what kind of research it is doing at the Sejong Station today. The exhibition also displays personal items belonging to explorer Lee Dong-hwa, such as his expedition journal as well as a signed document from Lee and his parents confirming that the explorer “shall commit not to demand any type of compensation damages to the Korea Sea Explorers despite the occurrence of loss of property or life, or damage to his or her body upon completing the preliminary training for the Antarctic expedition and the actual mission of the expedition.”

“When I was signing that document I didn’t really know what was written on it,” said Lee, who participated in the preopening of the exhibit on Monday. 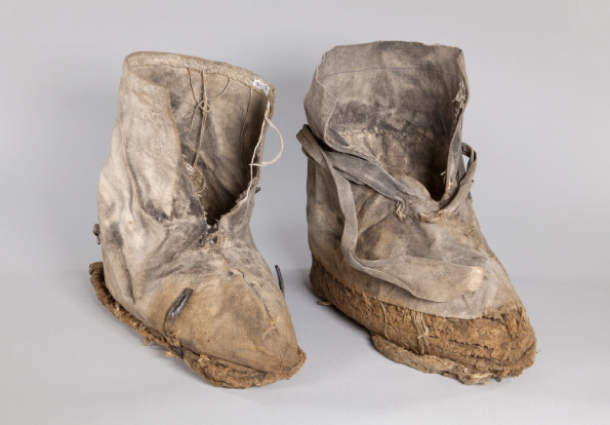 Boots, presumed to be made in Antarctica by a member of either Scott’s or Shackleton’s expeditions between 1901 to 1917. They are part of the collection of the Canterbury Museum in Christchurch, New Zealand.

“I only had one thought in my head - I must go to the Antarctic and I will sign whatever is necessary to go there.”

Looking back at his belongings from 33 years ago, Lee said he is filled with emotions.

“When I was on ice, my son was in my wife’s womb, and now, after 33 years, he is on ice at the Sejong Station, studying the Antarctic,” said Lee, adding that he spent his life dedicated to studying Antarctica.

“But I feel like what’s important is the next 30 years,” he said. “The climate is changing rapidly and it is impacting the Antarctic seriously.”

The exhibition ends with the “Antarctic Change” section, attempting to show how global warming is causing the decline of the Antarctic ice sheet and the cracking of the ice shelf.

“Antarctica has become a symbol of an insurmountable tragedy,” said Joo Kang-hyun, director of the museum. “The museum is attempting to trace past expeditions with this special exhibition, as well as embrace the spirit of Mother Nature through videos and mull over the future of the environment for a while.”

The Korea National Maritime Museum in Yeongdo, Busan opens everyday from 9 a.m. except on Mondays. It closes at 6 p.m. on weekdays and 7 p.m. on weekends. All exhibitions are free. For more information, call (051) 309-1900 or visit www.knmm.or.kr