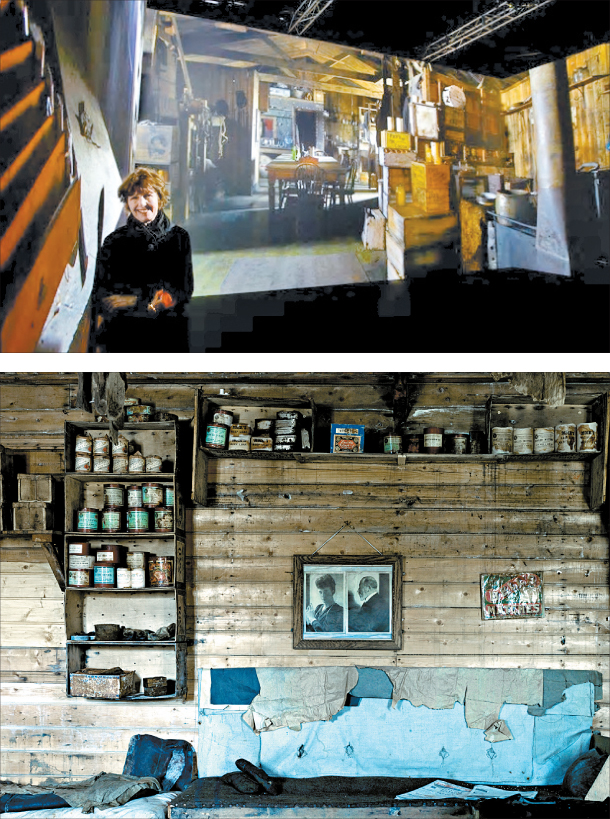 When New Zealand photographer Jane Ussher went to the Antarctic in 2008 to photograph the 100-year-old huts of British Antarctic explorers Captain Robert Falcon Scott and Sir Ernest Shackleton, she didn’t expect to be “so touched by the objects, rather than the big picture.”

That is why many of her photographs of the huts focus on the objects left behind by the explorers - the boots, the toothbrushes and the geology books.

“They seemed poignant,” explained Ussher, who visited Busan for the opening of the “Antarctic Still Life, History and Heritage” exhibition at the Korea National Maritime Museum.

“These belongings have been left behind by the explorers who either died on the ice or walked out of their homes, unable to take things with them,” she said. “I visited the huts a hundred years after their departure and it’s so poignant that everything is still just as they were a hundred years ago.”

Ussher thinks that is why her photographs are so effective.

“Because of the cold temperature, there’s no bacteria, so the huts look like they were a hundred years ago,” she said. “It’ll be like walking into a museum, but it’s not a museum. You are basically walking into their homes because most of these men were there for a lengthy period of time. They wintered over.” But with global warming, Ussher adds, that “you can’t hand on heart say that the Antarctic isn’t going to be changed.”

That is why the photographer asked then-Prime Minister of New Zealand, Helen Clark, if she could make it possible for her to spend enough time on the ice to photograph and document the huts properly.

“I’m interested in documenting buildings, people and environments with the idea that potentially they won’t be there forever,” said Ussher. “So I believe my responsibility is to produce a really good record, and an interesting record - not just somebody going in and taking bunch of cold photos, but record or documentation that actually helps people respond emotionally.”

Supported by the New Zealand-based Antarctic Heritage Trust, Ussher took her first trip to the Antarctic in 2008 and stayed for about four to five weeks to take the photographs that are on display at the exhibition.

To allow more people to really experience the inside of the huts, Ussher used a special camera that allowed her to blow up the images. She then took slices of the photographs and stitched them together to create large walls inside the huts.

“Even though the huts are so well conserved a century after, not many people have the opportunity to go down to the Antarctic,” she said. “I wanted people to be able to look at those photographs and the audio visual and get a sense of actually being there themselves.”

Ussher’s works have been exhibited in Christchurch, Auckland and Sydney. Busan is her fourth city.

“I really loved how the exhibition here has turned out,” she said. “I want to quote Mr. Lee, the curator, who saw the cube and said this was his inspiration [for] the exhibition - ‘The pearl in the dark sea.’ I thought that was really lovely way of describing the cube and then creating the rest of the exhibition with my photos and the objects from the Canterbury Museum around it. I thought it was quite poetic and it feels really complete.”