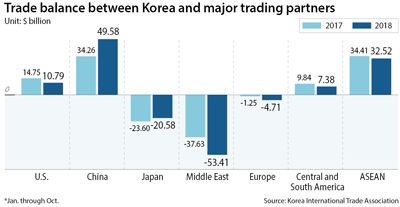 A global trend toward trade protectionism won’t stop Korean export sales from increasing by 3 percent next year, according to a local business lobbying group on Wednesday.

“It’s true that the global trade environment next year doesn’t look very good,” said Kim Young-ju, CEO of Korea International Trade Association (KITA) at a briefing with reporters held on Wednesday in southern Seoul. “But we looked into all of the country’s key export products and concluded there will be at least around 3 percent year on year growth.”

Under KITA projections, Korea will ink $625 billion in exports next year and $1 trillion in trade volume for a third consecutive year. 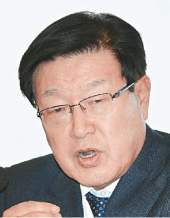 “Though semiconductor prices have been falling since the third quarter this year, demand for chips is expected to increase as high-capacity memory chips are necessary to bolster artificial intelligence and big data businesses,” Kim said. “Exports of ships will also likely increase next year, as ships ordered last year and this year will be delivered by then.”

On dangers of depending too much on chips for export sales, Kim said Korean chipmakers still have a competitive edge in their technologies to develop chips compared to other countries, so they will be able to maintain their dominant position for the time being.

According to KITA data, Korean chipmakers exported roughly $130 billion worth of chips this year, which is about 27 percent of projected global sales of $481.1 billion.

Still, exports of home appliances, steel, smartphones and automobiles will continue to struggle, KITA said. It has already been a tough year for washing machine makers and steelmakers exporting to the U.S. market as the United States slapped heavy restrictions on imports under U.S. President Donald Trump’s protectionist trade measures. Next year isn’t expected to be any better, though local companies are trying to make up for the losses by diversifying export markets.

Kim stressed the need for Korea to nurture start-ups so they can support export growth currently led by large conglomerates. He also said that export markets must be diversified from depending too much on the United States and China.

KITA is creating a support center for start-ups at COEX, southern Seoul. The center, which will open in April next year, will link start-ups with Korean conglomerates with established global sales network or directly with foreign buyers.

The organization is also planning to help craft strategies for companies so they can choose the optimal place to build manufacturing facilities with all relevant protectionist policies in mind.

Exports this year are projected to pass $600 billion, making Korea the sixth country in the world in terms of export size, KITA said.