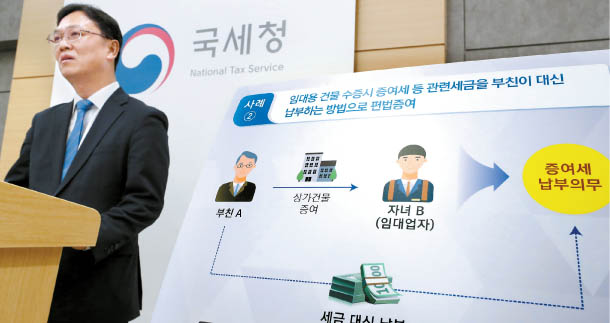 Lee Dong-shin, head of the asset taxation team at the National Tax Service, detailing some of the cases involving the illegal transfer of wealth to minors. Some wealthy families shift assets to their children leaving them with huge property portfolios or massive deposit accounts. [YONHAP]

A four-year-old kindergarten student purchased two apartments for a total of 400 million won ($354,657). Two elementary students each had 300 million won in savings.

These are the basic facts in two possible cases of illegal inheritance being pursued by the National Tax Service and disclosed on Wednesday.

In most instances, the parents or grandparents transfer the wealth by depositing money in installments over a long period of time.

In one example offered by the service, two high school students were living in Busan despite having no apparent employment income, making huge sums of money by leasing out of commercial real estate. The father is suspected of having transfered funds into the children’s accounts since elementary school. The funds were then used to buy the real estate.

The tax agency said it is investigating possible tax evasion by 225 people whose children seem to have become owners of deposits, real estate or securities in a suspicious manner.

“This illegal inheritance of wealth not only harms the culture of tax compliance, but also has a negative effect on fairness in the economy and exacerbates income inequality,” said Lee Dong-shin, head of the asset taxation team at the NTS. “We regularly verify inheritance and transfers to minors.”

According to the NTS, it has started investigating 41 people on tax evasion related to real estate transactions and leases. Of that number, 19 were minors whose source of funds used for purchase of the real estate was unclear.

One person under suspicion is a 12-year-old elementary student who purchased two apartments for 1.1 billion won. In another case, a 19 year old who has no income spent 1.2 billion won in purchasing real estate.

Additionally, 22 people, all of who were minors, generated income from real estate leases. In one case, a high school student purchased an officetel for 1.6 billion won and profited from leasing it. In another case, an elementary student bought a commercial building for 3.4 billion won, while the parents are accused of reporting to the authority lease income lower than the actual amount being paid by tenants.

Real estate isn’t the only area where the tax agency is looking. It said it will examine the accounts of 90 taxpayers who have inherited large amounts of cash and stock but failed to report the transfers to the tax agency.

In this year alone, the NTS said it has investigated 297 minors suspected of receiving funds without properly paying taxes. It taxed the funds at an 8.6 percent rate and charged a 90 percent rate on interest earned.

A high school student received 700 million won from his father, who works as a high-level executive at a conglomerate, and tried to hide this fact by diversifying investments.

A total of 73 people, including 34 minors, will be under investigation for receiving equities through accounts owned by either high-level employees working at the companies of the parents or through accounts under the names of relatives.

The NTS said it is looking into 21 people who profited from real estate lectures and consulting. In one case, a lecturer specializing in real estate owns 90 billion won worth of property. The lecturer was unclear about the source of the investment funds and falsely reported that the income was derived from lectures rather than real estate.

The NTS said separately it will be looking into 199 people who reported below-market values for apartments inherited or been given as gifts as a mean of reducing tax owed.