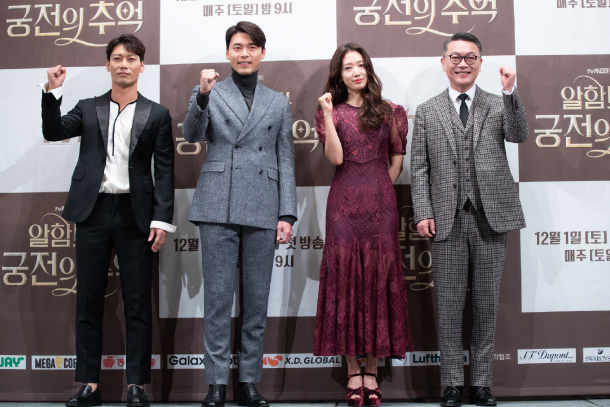 Stars of the upcoming tvN drama “Memories of the Alhambra” attend a press event on Wednesday. From left to right are Jang Hoon, Hyun Bin, Park Shin-hye and Kim Eui-sung. [TVN]

Thanks to popular games and films like Pokemon Go, “Avatar” (2009) and “Minority Report” (2002), augmented reality (AR) has gradually become a familiar technology to many, and audiences will soon be able to watch a drama that adopts the technology as a core element of the plot.

The upcoming tvN drama, “Memories of the Alhambra,” starring Hyun Bin and Park Shin-hye, is a fantasy romance series that tells the story of the ambitious head of an IT investment company named Jin-woo (Hyun Bin) who visits Spain after getting an offer from a mysterious programmer to buy a heavily profitable AR game. Jin-woo is determined not to lose this profitable business opportunity.

But things do not go as planned after he begins an uncomfortable relationship with Hui-ju (Park), who runs a cheap hostel in Granada and turns out to be the programmer’s sister.

Directed by Ahn Gil-ho of the mystery series “Stranger” (2017), the most crucial part of working on the upcoming drama was finding the balance between fantasy and reality.

“The [technology] in the drama is more advanced than what we actually have today,” said Ahn at a press event held on Wednesday. “Instead of heavily relying on CGI [to depict AR], I focused on showing [what happens] in reality [between Jin-woo and Hui-ju], and the role AR plays in [building the pair’s relationship].”

Hyun Bin, who says he is always in search of something new, was fascinated by the idea of AR playing a role in the drama.

“I always strive to try different things even if that difference is small,” said Hyun Bin at the press event. “This is the first [drama] to properly depict AR in Korea, and I was fascinated to deliver a new and refreshing story to viewers.”

“Memories of the Alhambra” also offers a social message that audiences will be able to sympathize with, according to Park.

“While reading the script, I could feel the social message of the show. It deals with a number of social issues that are relevant to society,” said Park. “I also liked my character because she is very humane and has a warm heart.”