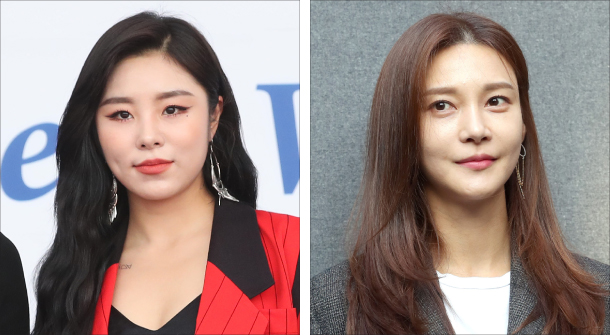 A person claiming that singer Wheein’s (left) father had borrowed money using her name came forward on Tuesday. On Wednesday, actor Cha Ye-ryun (right) revealed that she paid off a 1 billion won debt for her father. [NEWS1, ILGAN SPORTS]

While people are still divided over whether it’s morally right to criticize celebrities for the transgressions of their parents, things are getting more complicated as more people come forward with revelations against celebrities. And with the stars taking different measures with each case, reactions are as diverse as the crimes committed.

After an anonymous internet post accused him and his late wife for loaning them money and not paying back for 20 years, singer Rain’s father met with the author on Tuesday afternoon. While the singer’s agency Rain Company stated that they will try their best to “solve the issue,” on Wednesday, the company said that it will be taking legal measures against the author.

“Rain’s father and the President of Rain Company met with the person [who wrote the post] and tried to talk,” stated the agency. “But we were not able to confirm any of the promissory notes that they claimed [to have]. Instead, they only made insulting remarks towards Rain’s family and requested compensation of 100 million won ($88,664). Rain will take responsibility and pay for any amount that can be verified, but as they are seriously harming his parents’ reputation, we will be taking legal measures against them.”

Rapper Dok2, who was mired in a similar situation earlier this week and was criticized for his initial comments, was actually complimented by his mother’s victim later on. On Tuesday evening, the creditor stated that “Dok2 called right after the issue got out and told us that he’d like to pay us back, and took care of the matter very smoothly.” The person added, “He was honest and polite. We are grateful that he understood our pain and expressed his thoughts with clear words.”

Dok2, upon hearing of the news on Monday, went live on Instagram to speak out against the victim, saying that the 10 million won his mother owed them was “nothing but a month’s worth of meals” for him. He decided to pay them back on Tuesday.

Similar praise went to actor Cha Ye-ryun, who revealed on Wednesday that she had paid off nearly 1 billion won of her father’s debt, for which he had been sentenced to three years in jail for fraud in 2015. According to Cha, she has not been able to meet her father for 15 years, but she still tried her best to pay the debt off for 10 years. “I felt responsible and paid off the debt. I used all the money I earned in doing so,” said Cha.

The actor paid off the money regardless of the fact that her parents are divorced and she has no relationship with her father.

On Tuesday, an anonymous post was uploaded on Nate Pann, an online community, claiming that the father of Wheein from girl group Mamamoo had borrowed 20 million won from the author’s father and did not pay back, resulting in the bankruptcy of their business. “We were reluctant to carry out business with him, but he kept reassuring us that his daughter was the member of an idol group,” the post read.

Wheein came forward Tuesday night, stating that she had not been in touch with her father for a long time and that she and her mother had suffered because of him.

“I grew up without my father in my life,” said Wheein through an official statement from her agency, RBW. “He was indifferent to his family, and negligent of his duties as a father. Our family has been constantly suffering from unexpected debt because of him. They got divorced in 2012, but my mother had bad credit from just months beforehand. My mother and I had to suffer for a long time.”

Despite her fractured relationship with her father, she apologized, and said that she would see that the problem gets solved as quickly as possible.

While most people are siding with the singer, saying that she shouldn’t be held responsible for someone who had not taken responsibility for her, it seems that the fury over rapper Microdot is building ever more, as none of his family members are stepping up for payment.

On Wednesday, Microdot’s aunt who recently returned from New Zealand after meeting with the rapper’s parents earlier this month, told local press that they will not be taking any responsibility for the claims against them. The rapper’s aunt visited the couple to ask for her money back, which she needed for medical care after she was diagnosed with pancreatic cancer. “They sent me back, saying that they were not well off,” said the relative. “[Microdot’s father] told me that they had paid for their sins, because they went through so much there [in New Zealand].”

Amid all the controversy, there’s one big name being called out for not paying his own debt. Former national basketball team player Woo Ji-won was reported on Wednesday to have borrowed 50 million won in 2013 and has evaded paying them back for the past five years. The person who claims that they loaned Woo the money will be filing a complaint within the week.

Woo’s agency came forward later on Wednesday and said that he “talked things out with the accuser and paid him back right after the news got out.”