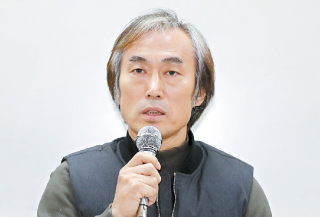 Actor Jo Duk-jae uploaded a Facebook post on Wednesday claiming that footage revealed on Tuesday’s episode of the MBC program “The Fake You Believed In” is not the whole story.

The footage that was aired shows a set during the filming of a scene for the 2016 movie “Analog Human,” in which actor Ban Min-jung is being sexually assaulted by Jo. According to Ban, Jo, who was playing the role of an abusive husband, was not acting when he struck her by the shoulder in an elevator, and claimed that it was sexual assault.

“People may think that this is just acting, but I was really being [sexually assaulted] and it was very terrible,” Ban claimed on the program. “If you look at the footage, I am running away from the camera. [At the time,] I only wanted the filming to end soon.”

On Wednesday, Jo denied Ban’s claims and said that the footage was simply trying to “rescue Ban.”

“If the program intended to fully cover [our case,] it should have done in-depth research,” he wrote. “Ban claimed that her pants had been partially pulled down and that her zippers were down. Three staff members claimed after the filming that they had seen the filming of the scene, but it later turned out that [Ban’s claims] were false.”

Jo also added, “When Ban first reported the case to Seoul Crisis Intervention Center for Women and Children, she claimed that [I] tried to pull down her pants. The program must have revealed why she made the claim. The full clip of the scene must be revealed.”

The sexual assault case was first brought to court in 2015. In September, the court found Jo guilty and sentenced him to one year of prison with a two-year suspended sentence.