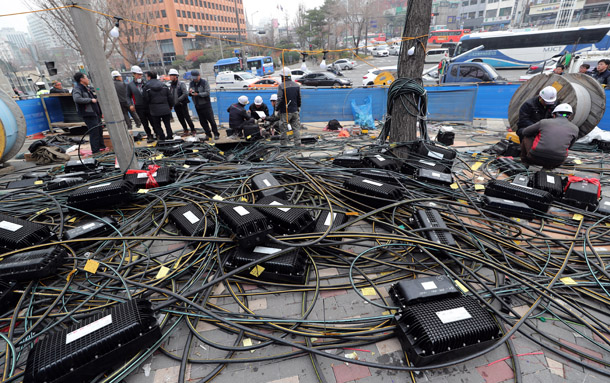 In February 2010, the BBC conducted an experiment on living without the internet. Korea was chosen for the test as it was a hyperconnected society where almost every household had a high-speed internet service. The BBC searched for familial volunteers in the Kukdong Riverside Apartments in Dongjak District, southern Seoul, but it was not easy. Most families were reluctant as children had to submit homework online and many people worked from home. Some said that they could not imagine living without the internet.

After searching for a week, the BBC found two families who agreed to go without internet. But not long into the experiment, the mother of one of the families had trouble arranging a parent’s meeting to share educational information, as offline meetings were scheduled online. Another family complained to the BBC reporter that they could not compare prices before buying things.

There were positive changes, like children reading more books. But the overall experience was inconvenient. As the experiment ended and they went back online, there were “Sighs of relief all around,” reported the BBC. When asked whether any of them would recommend the experience to their friends, a college student said, “Definitely. They need to know how suffocating it can feel living without it.”

This was even before smartphones became ubiquitous in Korea. Now we live in a hyperconnected society. It is hard to imagine life without a network. Some people blog that they are trying to live without internet and smartphones as they fear addiction, but I wonder how these blog entries were posted when the users claim to be offline.

A coworker who used KT for their mobile phone family plan told me, “You shouldn’t put all your eggs in one basket.”

In the United States, there is a manual that explains what to do in the a situation without internet and communication. Korea also needs to draft a manual in case of a communications outage.