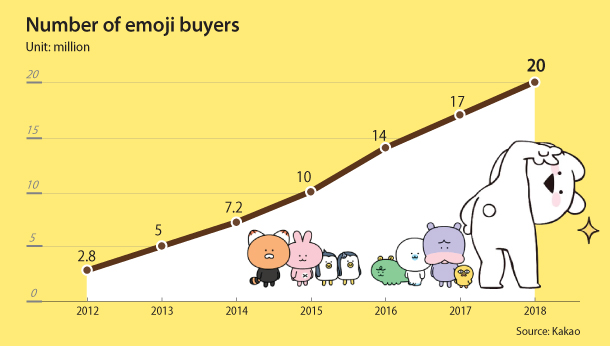 Kakao’s emoji business recently reached a milestone as the company announced Wednesday that it has sold emojis to 20 million users since the service launched in late 2011.

Kakao currently offers 6,500 different purchasable emoji sets, a huge increase from the six it started with in 2011. The company released its sales figures on Wednesday ahead of the emoji service’s seventh anniversary.

There are currently 50 different emoji sets that have each recorded sales of over 1 billion won ($887,047).

Kakao, which has over 50 million KakaoTalk users globally, also reported that an average of 2.2 billion emoji messages are sent every month, a fivefold increase from the number of emoji sent monthly in 2012.

Emoji sets, usually sold for 2,200 won, have long been an iconic part of KakaoTalk. The Kakao Friends series based on Kakao’s own emoji characters has been sold 25 million times.

Kakao’s emoji business has also gone through changes in the past seven years, with the company reporting that emojis are now more focused on typography and new experimental formats compared to the old days, when sets based on existing characters and content were popular.

“Kakao will provide a service that prioritizes content makers and users so that the new content environment for emojis grows and expands,” said Kim Hee-jung, the head of Kakao’s digital item team.

Despite the impressive figures and growing business, the emoji service has recently made way for Kakao’s other businesses in its paid content sector as the company looks to diversify its sources of revenue.

Kakao reported this third quarter that from sales figures from its paid content, which also include content platform KakaoPage and a Japanese cartoon app, emojis and other business sales accounted for a 15 percent share, down from a 21 percent share last year and a 25 percent share in 2016.