[News in focus] Brokerage outlets on the decline

[News in focus] Brokerage outlets on the decline 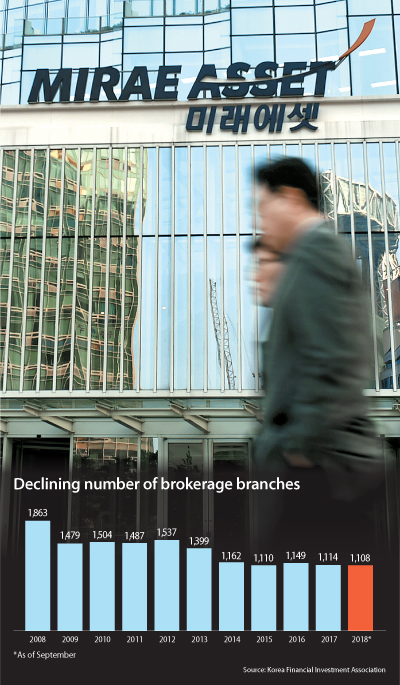 Many of the prime spots in Yeouido, the country’s financial district in western Seoul, were once occupied by securities firm customer centers.

But the locations have increasingly given way to coffee shop chains and restaurants as major brokerage houses reduce the number of branches in an effort to cut fixed costs and improve efficiency.

The process is not easy, however, due to opposition from workers concerned about job security.

The company has shut or combined more than 20 centers in a year, and Mirae Asset Daewoo is set to accelerate the pace of downsizing by slashing 30 percent of the remaining 145 branches, the labor union claims.

“When Mirae Asset and Daewoo were merged, Chairman Park Hyeon-joo promised to maintain the size of the offline branch network, but the stance has since changed,” the union said in a statement.

“It is now working to carry out restructuring in the name of increasing efficiency and competitiveness,” it said.

Mirae Asset Daewoo countered, saying that the shutting of locations is intended to remove redundant outlets.

“Since we merged with Daewoo Securities, there have been cases of us having three branches in a neighborhood,” a spokesperson of Mirae Asset Daewoo said, adding that the issue has yet to be decided.

“Mirae is also moving to combine smaller centers into big, integrated branches in order to offer a wide range of services at one location,” the source said.

The union noted the downward trend in the number of workers as more branches stop operating. Mirae Asset Daewoo’s total head count went from 4,677 last September to 4,545 in the same month this year.

“It is inevitable that the closures lead to layoffs,” a member of the union said, “Or that workers might be demoted to less important jobs, a tactic to nudge them into leaving the company.”

The union members also expressed concerns that the move is not in the interest of clients and will lead to an erosion in the number of investors.

“Still, there is a client base more accustomed to visiting branches,” the member said, “So, on the customer side, it’s not good news.”

The closure of brokerage house branches is a broader industry trend.

The reduced presence comes as more investors turn towards online and mobile devices to process their transactions.

Of all the trades made on the main Kospi bourse, online trading accounted for 42.7 percent last year and mobile device trading at 34 percent. Transactions done at branches accounted for 14.8 percent.