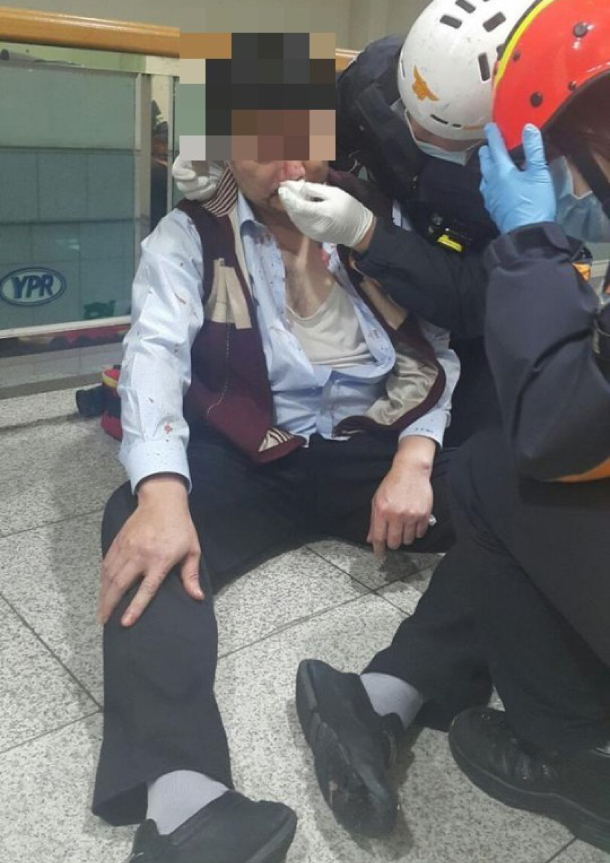 An executive at an automobile parts company in Asan, South Chungcheong, is treated for his wounds after he was beaten by union members affiliated with the Korean Confederation of Trade Unions on Nov. 22. [YONHAP]

Opposition politicians are demanding the heads of labor activists and police after it was revealed on Tuesday that officers stood by while members of the Korean Confederation of Trade Unions (KCTU) beat an executive of an automobile parts company last week.

On Nov. 22, as many as 50 members of a union affiliated with the KCTU broke into the building of YPR, a Hyundai Motor contractor in Asan, South Chungcheong, and forced two executives to seek refuge in an office.

Seven members soon broke down the door to the office and beat up a managing director while raining insults upon him.

The director, identified only by his surname Kim, was punched and kicked for around an hour until blood covered the floor, according to witnesses at the scene.

Based on a police report and testimony by YPR CEO Choi Cheol-kyu obtained by the JoongAng Ilbo on Tuesday, the incident took place after Kim engaged in wage negotiations with a different company union not affiliated with the KCTU.

A handful of police officers arrived at the scene after the company made six attempts to contact them. They did little to stop the union members after they were blocked from entering the building.

For over forty minutes, the police stood by as union members beat a screaming Kim and threatened to hurt his family, Choi claimed. One of the assailants even said he would “kill [Kim] and go to jail.”

The beating left Kim with a broken nose and fractures in his skull. He will have to be hospitalized for up to 12 weeks. His injuries have left him unable to testify to the police.

Meanwhile, the alleged assailants have gone unpunished, though a spokesman for the Asan Police Precinct told reporters on Tuesday that five of those involved in the assault have been identified.

Conservative politicians and pro-business pundits have labeled the incident a case of undue violence exercised by a militant union.

In a meeting at the National Assembly on Wednesday, the main opposition Liberty Korea Party’s (LKP) interim chief Kim Byung-joon blamed the Moon Jae-in administration for allowing the KCTU to become “mad with power” and act like it owned the world.

“Our country’s law enforcement has completely fallen apart, and the KCTU is reigning as the nation’s supreme tyrant and authority,” LKP Rep. Kim Moo-sung said at a debate later that day as he called for the policemen who stood by to be fired. “This is all President Moon Jae-in’s fault.”

This heightened rhetoric by the conservative opposition, analysts say, appears to be part of a strategy to drain the Moon government of public support by associating it with the aggressive behavior of certain labor activists in the leftist KCTU, one of the largest umbrella unions in the country. The KCTU is known for its cohesion and occasional belligerency.

But the KCTU has vocally opposed the liberal Moon government recently for its re-evaluation of its labor reform policies. On the day of the assault last week, it staged a massive strike nationwide to protest a major deal between Hyundai Motor and the government and a change to the government’s 52-hour workweek policy.

Perhaps as a gesture of mediation, the ruling Democratic Party’s chairman, Rep. Lee Hae-chan, stressed on Wednesday that violence should never occur, and said that he would support measures to harmonize the relationship between labor and management.