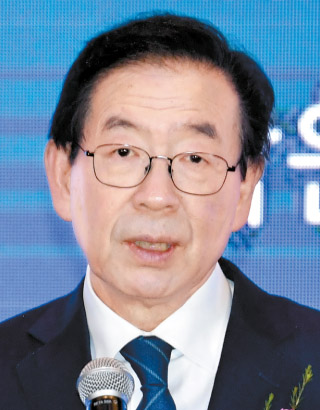 High levels of fine dust in Korea recently have caused concern over pollution coming from China.

During the 30-minute meeting, Li said that he “strongly supports exchanges focused on the local governments of the two countries” and called “for more active cooperation to resolve environmental issues and expand people-to-people exchange.”

Park was accompanied by the mayors of the Korean cities of Daegu and Sejong and the governors of the provinces of South Chungcheong, South Jeolla, North Gyeongsang and Jeju Island.

Li told the Korean local government heads that “South Korea is an important trade partner for China, and a country with great potential for future development.”

He went on to point out that local governmental cooperation “is proving to be a platform with great hidden potential for cooperation between the two countries.”

Park said that, while relations between the two countries central governments are important, “local government exchange is just as important.”

He then expressed hope that “Korean and Chinese local governments will share their many experiences and policies on tourism and environmental pollution for more detailed and practical exchanges.”

There have been indications that Chinese tourism to Korea has rebounded in recent months. The number of Chinese tourists plunged following the deployment of the U.S.-led Terminal High Altitude Area Defense (Thaad) system in the country last year, which China was opposed to.

Park’s four-day trip to Beijing, which kicked off Sunday, comes as the two cities mark the 25th anniversary of establishing sisterhood ties.

On Monday, Park took part in a Seoul-Beijing forum on climate change and air pollution

“I am certain that the joint research group will be the foundation for a healthier Seoul and Beijing,” said Park at the forum. “Climate change and environmental pollution is not a problem of tomorrow; it is an urgent task that is threatening our lives today.”

The results of the study will be announced in the latter half of next year. Park also became the first Seoul mayor to give a lecture at Peking University later that afternoon .

He spoke in front of some 170 students on a response to global climate change, renewable energy, urban restoration, as well as youth innovation policy.

“This year marks South Korea and China’s 26th anniversary of bilateral relations, and the 40th anniversary of China’s reform and opening up,” said Park during the lecture. He referred to areas that Seoul and Beijing can cooperate in, and pointed out that “climate change caused by greenhouse gas emissions, air pollution and uncontrolled city development are joint tasks that Seoul and Beijing can resolve together.”

Likewise, he underscored that “Korea and China will prepare for a new 100 years together.”

He told Korean students studying in China “not to forget [they] are an important bridge in Korea-China relations and public diplomacy.”