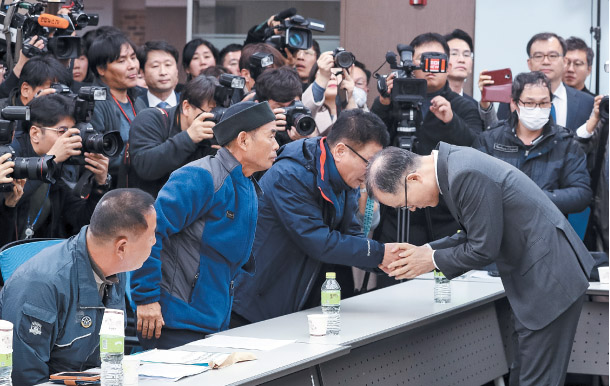 Prosecutor General Moon Moo-il, right, on Tuesday apologizes to victims of rampant abuse and killings at Brothers Home, a labor camp in Busan, in the 1970s and ’80s. [NEWS1]

With tears in his eyes, Prosecutor General Moon Moo-il on Tuesday apologized to victims of rampant abuse and killings that took place in the 1970s and ’80s at Brothers Home, a mountainside labor camp in Busan.

It was the first apology by a top law enforcement official for the prosecution’s involvement in a cover-up of what historians call one of the most egregious atrocities in modern South Korean history.

“I apologize from the bottom of my heart for the fact that the truth behind the abuses have never been fully revealed and that the tragic reality continues to this day,” Moon said at a rehabilitation center in Yeouido, western Seoul, where the prosecutor general heard testimonies from around 30 survivors who have spent decades trying to get the National Assembly to dig up the truth behind the abuses at Brothers Home.

“The government, in the past, created an internal security decree without a legal foundation,” said Moon as began his speech to the victims, pausing to contain his emotions. “[The government] used force to lock up citizens at Brothers Home.”

The stories of the victims, which have been kept quiet for so long, is deeply intertwined with South Korea’s arrival to modernity and the brutality that lurked beneath its shimmering growth.

In 1975, the Park Chung Hee government imposed a decree ordering that “vagrants” - a term loosely defined to include orphans and homeless and disabled people - be interned at 36 isolated facilities.

Thousands were rounded up as a result. They were sent to a variety of places officially classified as welfare homes. In reality, they were not much more than concentration camps.

According to The Associated Press, which published a lengthy report on Brothers Home in April 2016 based on hundreds of exclusive documents and interviews with officials and former inmates, the abuses at the camp “were much more vicious and widespread than previously known.”

Unpaid inmates worked in more than 20 factories within the grounds of the facility. They made a variety of products like clothing and shoes that were then sold abroad to line the pockets of the institution’s managers, particularly its owner, Park In-keun.

Quarantined from society by tall walls, guards and dogs, the inmates at Brothers - many of whom were children - were beaten almost daily, fed almost nothing and lived a hellish existence as slaves.

The numbers interned at Brothers only increased in the 1980s as Korea prepared to host the 1988 Summer Olympics. The authoritarian Chun Doo Hwan regime instituted a massive crackdown to “cleanse” the country’s streets.

Among the approximately 4,000 people interned at Brothers, at least 513 internees died over the span of twelve years, according to official counts, though the actual number of dead is believed to be much higher.

Witnesses say that death as a result of beatings, rape and confinement, among a litany of abuses, were so common that the bodies were piled up like garbage and buried en masse.

The human rights violations at Brothers first came to light in March 1987 after 35 inmates escaped the facility. But the Chun Doo Hwan regime, fearing that revelations of rampant abuse would add fuel to public resistance against authoritarian rule, forced prosecutors and courts to close the case as fast as possible. Park In-keun, who made a fortune from running the camp for over a decade, was only sentenced to two years in prison.

Despite the scale of the atrocity, the case has gained minimal attention since then, largely as a result of a massive “cover-up orchestrated at the highest levels of government,” according to The Associated Press.

Attempts at investigations were suppressed even under subsequent governments, as key figures at the time continued to wield influence in politics and the bureaucracy. Kim Yong-won, a former prosecutor based in Busan who first pursued the case, was eventually forced out of his position by superiors.

Kim was in attendance at Moon’s apology, and stressed the institutional nature of the prosecution that prevented proper justice from being served. “Many prosecutors are still loyal only to the hierarchy,” Kim told the JoongAng Ilbo on Wednesday. “If we do not change the structure of the prosecution, there will be a second Brothers Home.”