1 year on, bionic eye is a success

1 year on, bionic eye is a success 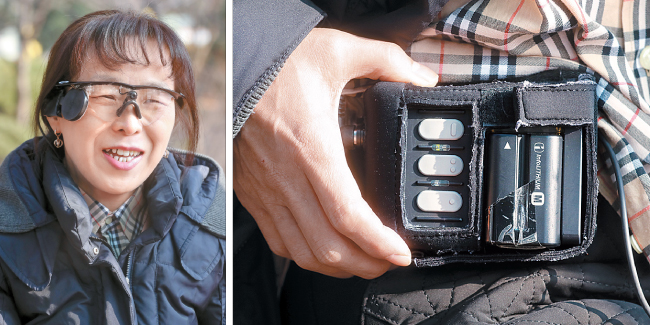 Lee Hwa-jeong, left, is the first patient to receive a bionic eye in Korea. Lee wears a small camera that is mounted on a pair of glasses. This camera sends images to a transmitter that she wears around her waist. The transmitter, above, then sends signals to a chip that is implanted in the back of her eye. [CHOI JEONG-DONG]

Last year, Lee Hwa-jeong became the first patient in Korea to receive a bionic eye. Thanks to the advanced implant and further treatment, her eyesight has partially been restored.

Lee, who went blind in 2007 due to a genetic disease, retinitis pigmentosa (RP), received the transplant in May 2017 from Prof. Yoon Young-hee at the Asan Medical Center in southern Seoul. News of her successful surgery quickly spread through the media, and the over 10,000 patients who suffer from RP in Korea started to hope for a better future.

The JoongAng Ilbo interviewed Lee on Sunday near Hankuk University of Foreign Studies about her life after the surgery, the treatments that she had to undergo and how she recovered her eyesight.

“I can see the waves crashing against each other and the stars sparkle in the sky,” said Lee. Right after her surgery, she could only see the largest letters on an eye chart, but now, after extensive treatment, she can differentiate the second biggest letters on the plate. Bionic eye transplants only restore eyesight to the point where one can differentiate objects and obstacles in black and white. However, through extensive treatment, one’s eyesight can improve beyond that, as Lee’s has.

Bionic eyes are implanted in the existing eye structure in order to restore some level of visual perception. The implant that Lee has is the Argus II Retinal Prosthesis System, the only commercially available bionic eye system that is approved by the Food & Drug Administration in the United States. It works to restore visual perception for people with severe RP.

The Argus II is a two-part system that includes a small camera mounted on a pair of glasses. The images are sent to a transmitter that the patient has to wear around their waist. The transmitter then sends a tiny array of electrodes to a chip implanted in the retina. The chip’s electrodes stimulate the retinal cells to perceive images that could not been seen before.

The surgery alone costs 200 million won ($177,360) and is not yet covered by health insurance. Lee was one of five lucky patients who received the surgery for free from Asan Medical Center.

“Next year [the hospital] plans to provide free surgery for three to five more patients, but [the treatments that they have to undergo afterwards] will not be free,” said Professor Yoon.

However, the cost of the treatments did not deter Lee from wanting to see her husband one last time before he passed away.

Lee says her bionic eye was the “last present” given to her by her recently-deceased husband, who passed away from colon cancer three months after she received the implant.

Lee’s husband became her eyes after she went blind in 2007, and he was the first person to recommend the surgery to her.

“When I opened my eyes after the surgery, the first thing I saw was a vague image of my husband and daughter,” said Lee. “We embraced each other, crying [tears of joy]. Later I heard my husband saying that he would no longer feel sorry about dying and leaving me all alone.”