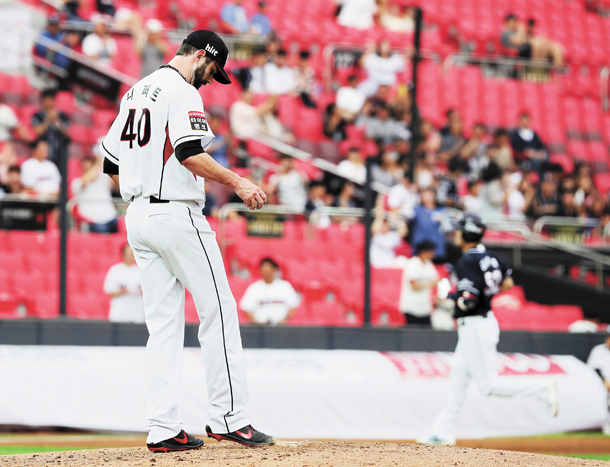 Dustin Nippert of the KT Wiz reacts after allowing a home run during a game against the Doosan Bears at KT Wiz Park on July 11. [YONHAP]

Korea’s top baseball clubs appear to have changed their strategy when it comes to recruiting foreign players this season. Rather than expensive big names, KBO teams appear to be on the lookout for potential. 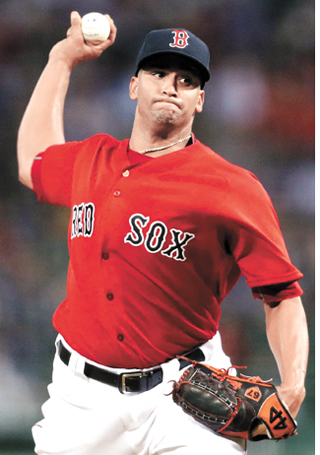 William Cuevas of the Boston Red Sox pitches against the New York Mets at Fenway Park on Sep. 14. [GETTY IMAGES/YONHAP]

The KT Wiz filled their quota for foreign pitchers on Thursday by signing pitcher William Cuevas. Cuevas signed a one-year deal at $670,000, joining Raul Alcantara on the Wiz’s roster. The Suwon-based team is allowed to recruit one more foreigner, but he has to be a position player.

Cuevas has played in 13 major league games with the Red Sox and nine of them were in the 2018 seasons. Throughout the season, Cuevas had a 7.41 ERA with two losses.

Although Nippert can play for a different club, chances are unlikely.

Nippert picked up double-digit wins each season with the exception of 2015. During 2015, Nippert failed to live up to his $1.5 million paycheck. He played in just 20 games, winning six and losing five. His salary fell to $1.2 million in 2016.

After the disappointing 2015 season, Nippert returned with a vengeance in 2016. Pitching in 167 and two-third innings, the American pitcher had 22 wins, more than any other pitcher in the league, and only lost three games. An impressive 2016 season allowed Nippert to win the KBO’s Golden Glove award and his contract to skyrocket in the 2017 season to $2.1 million. Injury-plagued and with issues outside the stadium, Nippert struggled to live up to potential once again, finishing the season with an ERA of 4.06, picking up 14 wins and eight losses.

Sticking around for one more year not only gave Nippert another million dollars, but he also rewrote KBO history once again. By picking up eight wins and eight losses in 29 games with a 4.25 ERA, Nippert became the first-ever foreign pitcher to pick up 100 career wins in the KBO. He has since extended that record to 102.

Although long considered a legend in the KBO - at Jamsil, they called him the Jesus of Seoul - Nippert’s days there are likely over. Heading into his late-30s, plagued by minor injuries and with constantly worsening stats, the aging pitcher is unlikely to be picked up by another team in Korea.

Nippert missed out on some of the Wiz’s spring training due to shoulder pain. Then, at the beginning of August, he was briefly excluded from the Wiz’s entry so he could rest.

Not only that, the league’s new spending regulations for foreign players have suddenly priced a lot of existing players out of the market. The new regulations, which forbid a team from paying more than $1 million for a player, do not apply to existing players, many of whom are already paid over the limit. KBO teams are left with the option of paying an existing player at higher rates or bringing someone new in at a reduced rate.

The Wiz isn’t the only team to part ways with its veteran foreign pitchers. The Heroes have also released Eric Hacker. Hacker signed with the Heroes mid-season after Esmil Rogers was released due to a finger injury. Although he had a 5.20 ERA, Hacker still helped the Heroes to the playoffs by picking up five wins and three losses. Once the season ended, the Heroes signed 29-year-old left hander Eric Jokisch instead, while retaining its two other foreign players.