Quick-witted referee may have averted tragedy

Quick-witted referee may have averted tragedy 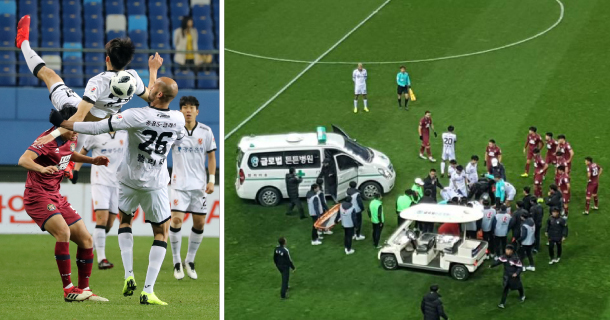 From left: Lee Seung-mo of Gwangju FC, center, loses balance in the air during a K League 2 match against Daejeon Citizen FC at Daejeon World Cup Stadium on Wednesday. An ambulance and medical staff on the pitch to transport Lee to hospital. [YONHAP]

The K League’s annual CPR training may have saved the life of 20-year-old Gwangju FC midfielder Lee Seung-mo on Wednesday.

During Gwangju’s K League 2 playoff semifinal match against Daejeon Citizen FC at Daejeon World Cup Stadium on Wednesday, Lee lost consciousness only three minutes into the game when he landed on his head after competing for a header.

Almost immediately after Lee fell, a quick-thinking referee ran up to Lee and administered CPR. Medics quickly joined the referee on the pitch and helped with first aid until an ambulance arrived. Lee was then transported to a hospital where he regained consciousness.

After an examination, Lee was reported to have fractured his neck.

The match resumed after Lee left the field and Daejeon won 1-0.

Lee made his professional debut with the Pohang Steelers in 2017 and joined Gwangju on loan this season. In 10 matches with Gwangju this season, Lee scored one goal and had one assist. He was also part of the U-23 Korean national football team that won gold at the 2018 Asian Games in Jakarta.

The K League strengthened safety regulations after Jeju United’s Shin Young-rok suffered a heart attack on the pitch in 2011.

On May 8, 2011, during Jeju United’s match against Daegu FC, Shin suffered a heart attack and lost consciousness. Jeju’s medical staff ran onto the pitch and administered CPR and Shin was transported to a hospital 12 minutes later. Shin didn’t regain consciousness until 50 days after the incident. Due to this, the K League made it compulsory for all referees to attend annual CPR training sessions.

It’s not only the K League that has dealt with life-threatening incidents. In April 2000, Lotte Giants’ catcher Lim Soo-hyuk collapsed due to heart arrhythmia at second base during a game against the LG Twins.

Lim failed to receive CPR on time and the brain damage caused by the incident resulted in him spending the next decade in a vegetative state. He passed away in February 2010.