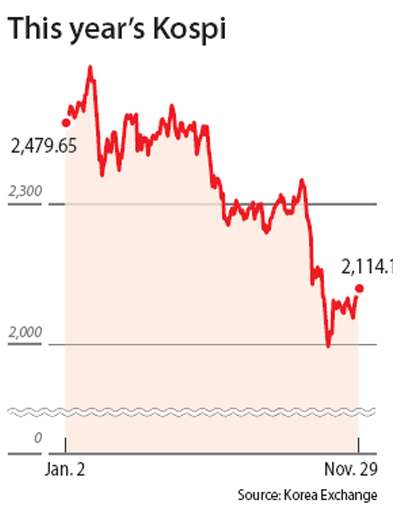 The Kospi rose 0.28 percent to end the day at 2,114.1, with gains capped as the Korean central bank held a monetary-policy meeting today.

Fed chair Jerome Powell said on Wednesday that the benchmark interest rate was “just below” the neutral level, a departure from past comments in which he suggested that the rate was far from neutral.

His remarks raised hopes for a slower pace of rate hikes in the coming months and were a factor in the strong performance of U.S. stocks. All major indexes in the United States were up more than 2 percent overnight.

Japan’s Nikkei took a positive cue from the jump, advancing 0.9 percent on Thursday, while the Kospi also started strong with a 1.22 percent rise. The Korean benchmark retreated later, with institutional and retail investors offloading shares.

The majority of analysts are betting on a rate hike decision at today’s Korean monetary policy meeting amid increasing debt levels and the rate gap with the United States.

Seventy-nine percent of 200 fixed-income analysts surveyed said that the Bank of Korea will move up its key rate for the first time in a year, to 1.75 percent from the current 1.5 percent, according to Korea Financial Investment Association.

Korea’s benchmark interest rate has stood at 1.5 percent since the central bank increased it from a record-low 1.25 percent last November. That was the bank’s first rate increase in six and a half years.

“We expect the rate to become 1.75 percent, because there have been growing calls for a rate hike,” said Kim Sang-hoon, an analyst at KB Securities.

“In the October meeting, two members advocated a rate rise in dissenting votes, and the latest minutes of the meeting suggest that more than half of six members intend to increase the rate,” he added.

The outlook is also in line with that of Bank of Korea (BOK) Gov. Lee Ju-yeol, who has expressed concern about growing financial imbalances.

“We need to address the accumulated financial imbalances in a gradual manner,” Lee said in an October meeting with heads of business lobby groups and economic research institutes.

The comment was seen as an expression of concerns over growing debt levels after a decade of low interest rates.

Commercial banks have already raised interest rates as they expect the central bank to normalize the monetary policy rate.

But not all analysts are in agreement, saying that the bank will hold the rate in the face of an economic downturn.

“The Bank of Korea will likely keep its benchmark rate steady because of the lower inflation level and GDP growth,” said Park Hee-chan, an analyst at Mirae Asset Daewoo.

“The market consensus points to a hike, but different uncertainties would weigh on.”