Pop stars find their voice via musicals: Despite public criticism, K-pop singers are now major players on the stage

Pop stars find their voice via musicals: Despite public criticism, K-pop singers are now major players on the stage 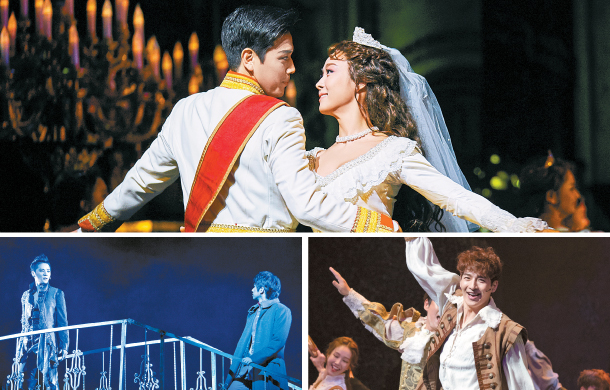 Musicals nowadays look very different than those staged 20 years ago because of one important role: most leading musicals in Korea involve at least one K-pop idol playing a lead character. Their appearances in musicals were not welcomed by the public at first, with some saying that the stars were simply “marketing strategies.” Now, however, with many singers having proven their talents on stage, their longevity relies on how well they play their characters.

“Elisabeth” - the second highest-selling musical of the month, after the Cirque du Soleil musical “Kooza,” according to Interpark Tickets - stars multiple singers from the K-pop world. Singer Ock Joo-hyun from 90’s girl group Fin.K.L, is inarguably one of the most popular and successful K-pop singers-turned-musical performers. She is one of the three actors playing the lead role of Elisabeth. Her career as a musical performer dates back to 2005, when she appeared in “Aida.” She continued her success with other popular musicals, including “Chicago,” “Rebecca,” “Wicked” and “Anna Karenina.”

Singer Kim Jun-su - a former member of the boy band TVXQ and a current member of JYJ - is another renowned K-pop artist who has gained fame as a talented musical performer. In “Elisabeth,” Kim plays the role of death, along with singers Park Hyung-sik from boy group ZE:A and LEO from VIXX.

The recent musical “Iron Mask,” which ran from Sept. 13 to Nov. 18, was also packed with K-pop singers starting off their careers in musical theater, including Jang Dong-woo from Infinite, Sandeul from B1A4, Lee Chang-sub from BTOB and Ken from VIXX.

“This wasn’t my first time seeing a musical featuring several K-pop singers,” said a blogger who is a long-time fan of boy band BTOB. “But I’ve never seen so many middle and high school fans watch a musical, which is usually very expensive. I think [the singers] performed well in the musical - I was pretty surprised.”

However, she also added, “They did well but I’m not sure if they matched the characters in the play - it was different from the ‘energetic, playful’ image I had of these pop stars.”

It was not an easy task for the four to alternate playing the role of King Louis XIV - it was each singer’s first time starring in a musical and each them had to live up to big expectations.

“We were competing with each other in some way,“ said Sandeul during an interview in September. “But it was a good form of competition. We studied and shared our thoughts on our role together. It was a win-win game.”

It remains difficult for many K-pop singers to dive into musical theater. Many musicals are criticized for having a “star marketing strategy” when they cast pop stars for major roles. Some have also argued that it is unfair to musical actors who have spent years training to become professional actors.

“[I’m aware that] it is unfair to those who aimed at being in musicals since the beginning [of their careers],” said singer Son Ho-young from boy band g.o.d. during an interview in April. “Nevertheless, there are no problems if these singers play their characters well.”

According to Won Jeong-won, a musical critic and professor of film and theatre at Soon Chun Hyang University, the problem is not whether or not these K-pop singers appear in musicals.

“What is important is how well these singers play the roles they are given. It is a mistake to think that just because someone is a pop star who can both sing and act, they can become a musical performer. It is wrong to be in a musical as a side-job. It is also wrong for that person to perform if he or she finds it hard to identify with the character. Rather, that person has to be careful in choosing the right character .”

He also added, “Musicals are a team project. Whether a musical turns out high quality depends on how well the characters, the stage, the staff and the stage design synthesize.”

When asked to choose the best musical performer right now, the professor chose actor Yoo Yeon-seok who is currently starring in the musical “A Gentleman’s Guide to Love and Murder.”

“Kim Jun-su has already been considered [one of the most popular K-pop singers-turned-musical performers.] I think that Yoo matches well with his bright and fun character in the black comedy musical; he [already proved this] through his roles in dramas like ‘Reply 1994’ and ‘Warm and Cozy.'"