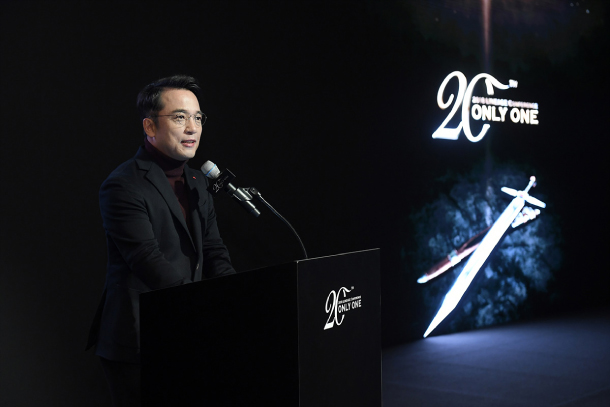 Kim Taek-jin, founder and CEO of NCSoft, introduces the upgraded Lineage at a press event held at Raum, a convention center in Gangnam District, southern Seoul, on Thursday. [NCSOFT]

NCSoft’s Lineage will go through a major face-lift in celebration of its 20th anniversary, the Korean game maker announced Thursday.

The classic massively multiplayer online role-playing game (Mmorpg) will be reborn under the title Lineage Remastered and will be available on a test server from December. Preregistration to try out the updated PC game on the test server began Thursday.

The biggest update is the brand new auto-play mode. With auto-play on, characters can perform almost every in-game activity alone.

They will be capable of 35 separate functions including monster hunting and storage management without needing direct control of the player.

“We are going to introduce the biggest changes in the history of Lineage, and we’re not sure how players will respond to them,” CEO Kim Taek-jin told reporters and Lineage fans at Lineage Remastered’s unveiling event in Gangnam District, southern Seoul on Thursday.

The company also invited Lineage players to attend the event.

“Lineage Remastered will introduce our first-ever auto-play mode Play Support System,” said Lineage Unit head Lee Sung-gu, who explained the updates. “We are adding this option in light of changes in the modern lifestyle that prevent users from spending as much time in front of the computer as before.”

A new mobile viewer will also allow players to keep track of the game on-the-go, even as it plays itself.

“To help users check what’s happening on their PC screen on-the-go, we will also introduce a mobile viewer system where their Lineage screen will be live streamed,” said Lee. “Users will be able to view their characters’ health, magic and experience points and perform basic functions.”

Other updates include a wider game window with a 1,920 by 1,080 full high-definition resolution, significantly bigger than the current 800 by 600 resolution. A new class of the most powerful characters to date will also be added, as well as new skills and items.

Much of Lineage’s user base is made up of people in their thirties and forties who grew up playing the game. In preparing for the renewal, the NCSoft team revealed they didn’t focus too much on attracting younger users, but rather on satisfying existing ones.

“We wondered, would teens and people in their twenties suddenly start playing Lineage just because of the renewal?,” said Lee. “We would be betraying our older users if we made changes to just suit our younger players’ tastes.

“With the rise of mobile games, people thought that there was no future for Lineage. But we launched a major update in 2012 without letting trends influence us, and Lineage was able to enter another golden age. We hope that, with Lineage Remastered, users feel that sense of excitement that they felt in the early years of Lineage.”