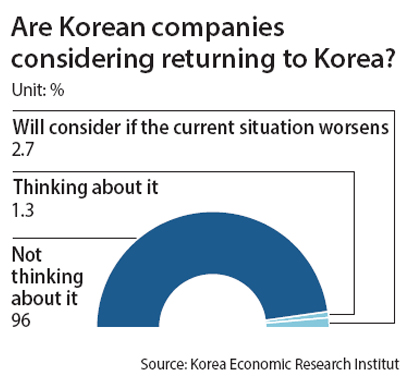 Companies moving production capacity back to Korea will qualify more easily for official support, including long-term land leases and tax breaks, the government announced on Thursday. While benefits have been available for returning firms for the past five years, the thresholds for eligibility have been adjusted downward.

The government is also extending to program beyond just manufacturers, and will offer benefits to service providers and conglomerates shifting business back to the home market.

Companies now only need to reduce their overseas production by 25 percent rather than by the previous 50 percent. The government is hoping that the lower trigger will lead to more companies taking advantage of the program.

“Since the bill on supporting companies stationed overseas in returning to Korea passed in 2013, we haven’t achieved a great deal of success,” said Prime Minister Lee Nak-yon during a government meeting on Thursday. “Since 2013, only 29 have been able to relocate back to Korea while 22 are preparing.”

He said the companies that have already received government support claim that the requirements are too onerous and the level of support not enough.

“We need to provide support from when the companies are preparing to return to Korea,” Lee said, adding that these companies face various difficulties ranging from tax obligations to costs related to liquidating their overseas operations. “Related government departments need to continue to enhance the support through regulation reforms and incentives,” the prime minister said.

Under the measures introduced on Thursday, the government will ease the eligibility requirements. Under the current regulations, only companies that have at least 30 employees in its overseas operations can receive aid on leasing property and buying facilities. Under the new measures, that requirement will be reduced to 20.

For small and medium-sized companies relocating back to Korea, the government will extend the period in which it will subsidize the incomes of employees.

The subsidy of 600,000 won ($536) per person will now last for two years, up from the previous one year. The deadline in applying for the subsidies will be extended to three years from the current two years.

A conglomerate will be able to get corporate tax cuts when reducing its overseas presence. Previously, companies of this type were only eligible for the corporate tax cut if they either liquidated or entirely sold off their overseas assets to a third party.

Other breaks have been offered. In the past, companies that return to Korea had to pay the 20 percent rural development tax even though other taxes had been forgiven. However, this tax will also be eliminated for qualified companies.

The government has decided to simplify the application process for companies relocating operations back to Korea. Candidates for the breaks currently have to submit 68 documents: that will be reduced to 29.

The Ministry of Trade, Industry and Energy said that the goal is to increase the number of companies returning to Korea to 100 by 2022. It believes that would create 2,000 jobs.

Under the current system, companies aren’t much interested in shutting down overseas operations and returning to Korea.

According to a survey by the Korea Economic Research Institute released on Wednesday, among 150 companies participating, only 1.3 percent, or two companies, said they are considering a return to Korea. Four companies, or 2.7 percent, said they might make the move if their businesses overseas worsen. Almost all - or 96 percent - said they have no plans to relocate their businesses back to Korea.

One of the biggest reasons for the lukewarm response to the Korean government’s efforts was the need for Korean companies to expand in the global markets. Companies also cited high labor costs and the lack of flexibility in the labor market.

Regulation was also mentioned as a reason for the lack of interest in returning to Korea.

“The government has overlooked helping businesses after they return,” said Moon Jong-chol, senior researcher at the Korea Institute for Industrial Economics and Trade. “The policy evaluation also needs to be focused, not so much on the number of companies that the government persuades to return, but on whether these companies have succeeded in reestablishing their businesses back in Korea.”

Some have argued that the government also needs to redesign its strategy for luring Korean companies back to Korea and pursue it with more of a focus on technology, an essential factor in the Fourth Industrial Revolution era.

In the past, many Korean manufacturers have moved their operations to China and Southeast Asia to secure cheaper labor. But today, there’s a possibility that many manufacturers will be locating in areas that have clusters of high-tech R&D centers and start-ups.

She said only when the government provides an appropriate environment for R&D investments and eases regulations that prevent innovation will Korea be able to attract competitive companies.