Sejong’s mayor calls for a branch of the National Assembly

Sejong’s mayor calls for a branch of the National Assembly 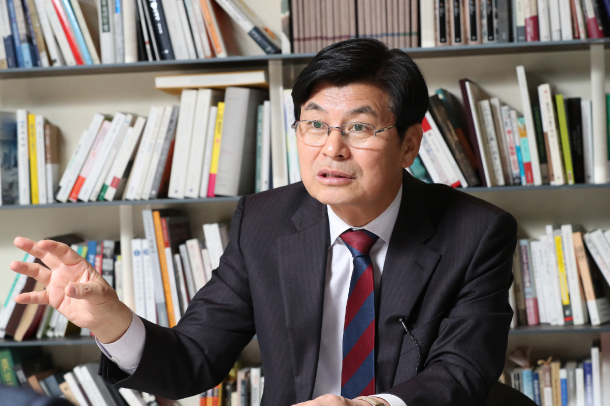 A plan to build a make Sejong into Korea’s fully-fledged administrative capital is still a work in progress.

The plan was first introduced during an election campaign by the former President Roh Moo-hyun. The former administration, however, failed to make Sejong the new administrative capital, as the country’s Constitutional Court concluded it is a violation of the customary constitution that Seoul must be the capital city. The administration wasn’t able to relocate the Blue House or the National Assembly.

Rather than making it the new capital, the government is treating it as a specialized area for government administration. Already, two-thirds of the central government complex have moved to the new city. Next year, the Ministry of the Interior and Safety and the Ministry of Science and ICT will also relocate to Sejong.

The relocation leaves behind only five ministries — the Ministry of Unification, Ministry of Foreign Affairs, Ministry of Justice, Ministry of National Defense and the Ministry of Gender Equality and Family — among the 18 administrative bodies under the central government.
However, government officials in Sejong still need to visit Seoul from time to time because key decision makers are either at the Blue House or the National Assembly in Seoul. This inconvenience puts the relocation problem back on the discussion table.

When public servants spend must of their time moving around, it’s a waste of national taxes. They should be able to spend more time on actually offering public services.

Sejong Mayor Lee Choon-hee, 63, stands in the center of the controversy on the relocation of the country’s administrative capital. Lee has been involved in the relocation talks since he was in Roh’s presidential transition committee in 2003.

When the JoongAng Ilbo sat down for an interview with Lee on Nov. 7, he said that “Sejong is like my alter ego, my destiny.” For roughly 16 years, his dream has been making Sejong the new administrative capital of Korea.

The following is an excerpt from an interview with Lee.

Q. You have been behind the capital relocation project for so long.

Do you think a government can control the real estate market? How can a real estate market settle down when people from regional areas like Busan and Mokpo still want to buy a house in the posh Gangnam District of southern Seoul? The president and the National Assembly must move to Sejong City so that politics no longer interfere with the country’s economy.

You had to deal with lot of opposition when first pursuing the relocation plan.

I think there are two major grounds to the opposing side. First, they don’t know the seriousness of the imbalanced distribution of population in Korea. At least those living in Seoul do not know about it. Half of the country’s population resides in Seoul. Countries that have not changed their capitals for a long time tend to show this kind of severe population concentration around the capital area.

French intellectuals took this problem very seriously. In the late 1960s and early 1970s, intellects protested a decentralized system. At this time, when you took a photo at night, only Paris would glitter with lights but all the other cities were dark. Youngsters there move to regional cities looking for opportunities. This change was a result of political effort the country put in. They amended their constitution as well. After the 1970s, France sent 60,000 public servants away from the capital to regional cities. Korea isn’t putting in enough effort.

This centralization, which makes Seoul’s real estate prices skyrocket, makes multinational companies choose Shanghai in China over Seoul when they are building their branch offices for the Northeast Asian region.

A feasibility study on creating a branch office of the National Assembly was conducted, right?

A feasibility study was conducted when Chung Sye-kyun was speaker of the National Assembly. As far as I know, the study showed that the benefit was three to six times larger than the cost incurred in establishing a branch office. However, the National Assembly did not announce this result. They don’t want to relocate.

Why should there be a branch office for the National Assembly?

There are many inefficiencies when political activities are centered in Seoul and administration is processed in Sejong. It is difficult for the two bodies to closely cooperate. This brings down the quality of government policies. Important policies must be discussed for a long time. Ministers and vice ministers sometimes have to stay up all night to debate on issues related to a policy to make it better. Under the current system, ministers and vice ministers stay in Seoul, while high officials from the administrative bodies go to Seoul for talks from time to time. It is very difficult for directors who actually need to handle policy-related issues to discuss problems with key decision makers.

Will there be a difference if a branch office opens?

If a branch office for the National Assembly opens in Sejong, the overall culture within the Assembly can change. Commuting to the current National Assembly building in Yeouido, western Seoul, is very frustrating as the subways are packed with people. How can you focus on work after being exhausted by traveling for over an hour every day in crowded public transportation? When a branch office opens in Sejong, we can construct a complex consisting of offices for lawmakers, libraries and accommodations. Lawmakers, their aides and employees of the National Assembly Secretariat can live closely in a single town. After work, they can simply walk to their homes with ease. The work routine from morning to night will be a lot different from today.

There are people who say inefficiencies will increase if the National Assembly is split.

There is not much collaboration needed between the ministries that stayed in Seoul and those that moved to Sejong. Usually the economy-related ministries and administrative bodies gather together for discussions and meetings. If the standing committee of the National Assembly moves to Sejong, they won’t need to travel to Seoul often for work.