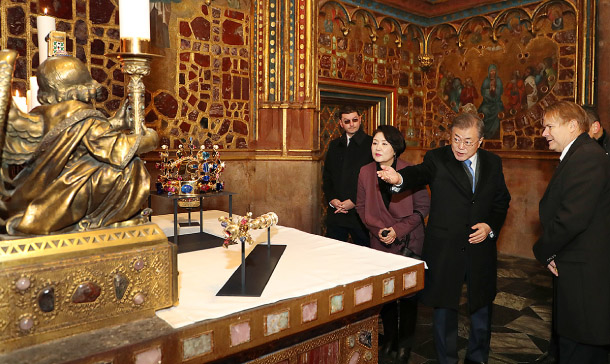 President Moon Jae-in, second from right, and first lady Kim Jung-sook visit the St. Vitus Cathedral in Prague on Wednesday during their two-day visit to the Czech Republic. The couple left for Argentina later on Wednesday for the Group of 20 Summit. [BLUE HOUSE]

Yoon Young-chan, Moon’s public affairs secretary, told reporters during a briefing in the Czech capital that Babis said he was well aware of South Korea’s success with the Barakah nuclear project in the United Arab Emirates and praised Seoul’s development of safe nuclear technology.

Babis, however, quickly added that the Czech Republic “hasn’t finished preparations” for the bid yet and didn’t relay any specific schedule for it, according to Yoon.

A high-level Blue House official who spoke on the condition of anonymity brushed off questions about whether Babis shunned Moon’s offer. He said that both leaders managed to build a “significant” level of “understanding” on the nuclear reactor deal and that Babis showed a “better reaction” to Moon than Seoul initially expected.

The official refused to elaborate specific details of their discussion, citing South Korea’s “strategy” in winning the bid. South Korea’s competitors include China, the United States, France and Russia.

The Czech Republic aims to place an order with a foreign country as early as next year to build two new nuclear power reactors and start operating them by 2030.

The South Korean government is “meticulously” going over ways it can win the bid, stressed the Blue House source. To accusations that it’s hypocritical for Seoul to enter the bid when Moon aimed to replace nuclear power with renewable energy in South Korea, the official underscored that the phase-out policy was “separate” from exporting nuclear technology.

Blue House officials said on background that Seoul initially pushed to have Moon talk with Babis in a “reception,” which has far lower diplomatic significance in the world of international protocol, given that the Czech prime minister is currently mired in a corruption scandal. The meeting was later upgraded to a “conversation” on the request of the Czech Republic’s Foreign Affairs Ministry.

After his meeting with Babis, Moon departed for Buenos Aires to attend the Group of 20 (G-20) Summit. He’s scheduled to hold his sixth bilateral summit with U.S. President Donald Trump on the sidelines of the G-20.

Moon will then head to New Zealand later in the week on a state visit to speak with Prime Minister Jacinda Ardern and Dame Patsy Reddy. Moon will return to Seoul next Tuesday to end his eight-day trip to three countries.