After difficult rookie year, Yang has a lot to prove

After difficult rookie year, Yang has a lot to prove 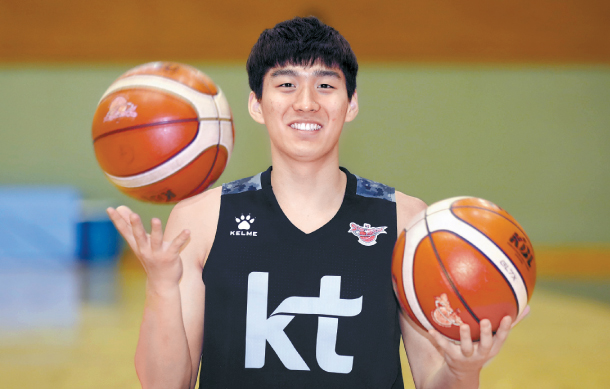 Yang Hong-seok of the Busan KT Sonicboom was briefly the darling of the KBL when he emerged as the most promising rookie of the year going into the 2017 season.

The Sonicboom forward’s accent to greatness didn’t last very long. It quickly became apparent that Yang was not going to live up to expectations and his name was forgotten by fans as the Busan team plummeted to the very bottom of the league. Yang finished the season averaging 7.6 points and four rebounds per game.

Yang’s fall from grace was so complete that at the KBL media day on Oct. 10, Jeonju KCC Egis’ veteran Chon Tae-poong didn’t even recognize Yang, asking him if he played for the Incheon ET Land Elephants.

But 2018 has been a different year altogether. Back from the break with a new approach and now more comfortably in the professional league, this year’s Yang hasn’t held back. The biggest difference in Yang’s game is in the three-point shots.

During the Sonicboom’s game against the Seoul SK Knights on Nov. 23, Yang made five three-pointers and against the Egis on Nov. 25, he scored 23 points. In his three most recent games, Yang has scored 65 points and had 26 rebounds. With Yang back on form, the Sonicboom is on a five-game winning streak for the first time in seven years.

“Last season, I would give myself a score of 30 out of 100,” Yang said. “Rather than hurting my pride, Tae-poong’s comment made me want to work harder. I went to middle school in Jeonju so I grew up watching Tae-poong.”

This season, Yang has been averaging 11.8 points and 5.9 rebounds per game.

The Sonicboom are now ranked second in the league with 12 wins and six losses - last season the team only picked up 10 wins in 54 games. The team’s sudden rise to the top has taken the league by surprise, setting the stage for an unlikely Cinderella story in the KBL this season.

But it’s not only Yang that has stepped up his game. The Sonicboom players are dominant in three-point shots with five players ranked in the top 20 in the KBL’s three point shot ranking.

“Up until last season, Yang Hong-seok just played,” said Seo Dong-cheol, head coach of the Sonicboom. “Since he was an ace player during his amateur career, he had a tendency to play by himself. But in his second season as a professional, he learned to play with the team.”

Yang agreed with Seo’s comment, saying that he is trying to move around the court more when he doesn’t have the ball. Yang also admitted that he tried to get involved in defense more compared to the previous season.

“David Logan told me to look at the rim rather than the ball when I shoot,” Yang said. “I’ve been practicing making about 300 to 500 shots a day. Even when I have a day off, I watch clips of NBA players LeBron James and DeMar DeRozan.”

In addition to improved accuracy in three point shots, the Sonicboom has reduced the number of come-from-behind losses this season. Throughout the 2017-18 season, the Sonicboom had a tendency to lose the lead in the fourth quarter. To try and get to the bottom of the issue, the team recruited a psychologist.

“They kept on telling us to be more confident and to play for the team,” Yang said. “Their comments really helped.”

Since his debut during his freshman year of college, Yang has been considered one of the younger players in the league. Although he regrets not being able to experience college life, he has never regretted making an early transition considering his long-term career goal.

“I thought that it’ll help my basketball career more if I play in the professional league after watching and training with veteran players like Park Chan-hee and Oh Se-keun when I was selected for the national team last year,” Yang said. “I have a big ambitions: I want to be selected for the national team again and eventually become a must-have player on the team, just like Lee Seoung-hyun.”

Aside from his national team goals, Yang’s short term aim this season is to win the KBL regular season title.

“Since we got up to second, I want to get to first now,” Yang said.

Yang also hopes to set a record as the league’s youngest player to achieve a triple-double in a game.

A triple double is when a player records double-digits in a single game in three of the following categories: points, total rebounds, assists, steals, and blocks.

The 2018-19 KBL season is divided into six rounds. Since there are 10 teams in the KBL, each team plays nine games in each round in a round robin format. Throughout the season, each team plays a total of 54 games - 27 away and 27 at home.

The Sonicboom will face the Ulsan Hyundai Mobis Phoebus at Sajik Arena in Busan at 7:30 p.m. on Dec. 7.