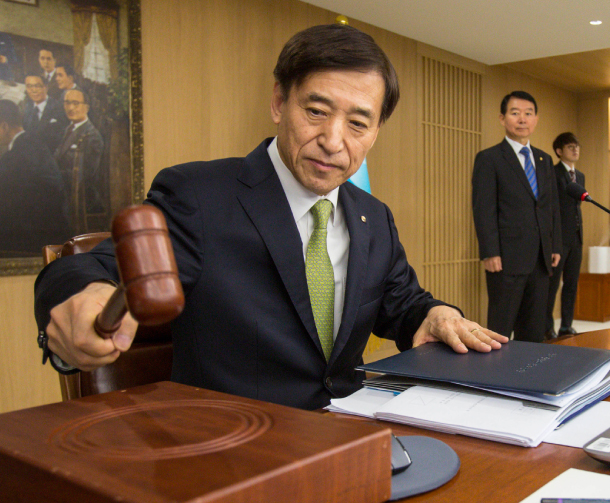 The Bank of Korea (BOK) raised its key interest rate on Friday for the first time in a year, a move that prioritizes the need to address widening financial imbalances over concerns surrounding low economic growth.

“The Bank of Korea decided to move up the benchmark interest rate by factoring in the economic state that is not far from the potential growth rate, inflation that is on a path to reach the target rate of 2 percent and growing financial imbalances,” said Governor Lee Ju-yeol. 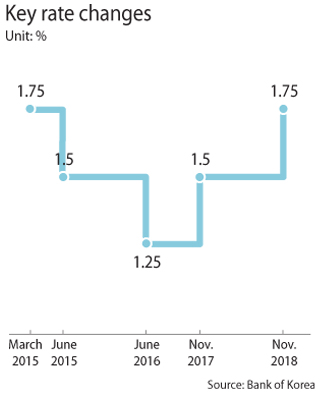 The central bank attempted to normalize borrowing costs last November with a quarter basis point increase as the governor raised the need to gradually adjust the BOK’s accommodative monetary policy. The change in direction was intended to ease the growing debt levels and other imbalance issues caused by the low interest rates.

The country’s outstanding household debt - which includes loans from banks and other financial institutions as well as credit card spending - stood at 1,514.4 trillion won between July and September, up 22 trillion won, or 1.5 percent, from the previous quarter.

But a further rate increase didn’t occur until Friday as the bank opted to stay at 1.5 percent in previous months in the face of worsening economic indicators including slowing gross domestic growth, tepid jobs market and moderate domestic consumption.

Still, Lee said that the 1.75 rate is “below the neutral rate” - the level that neither causes growth to accelerate, nor slow down - hinting at the possibility of more increases next year.

As for concerns that an increase could place pressure on the flagging domestic economy, Lee played down the idea that Korea is entering an economic downturn.

“I am very cautious about describing the Korean economy in a downward cycle and it would take more time to make an assessment,” he said.

The prospect of Korea entering an economic downturn was prompted at by major financial institutions trimming their forecast for this year through next year.

The BOK was among those institutions, cutting its projection from 2.9 percent to 2.7 percent in October. The International Monetary Fund cut its growth forecast for this year to 2.8 percent from 3 percent and to 2.6 percent from 2.9 percent next year. Global ratings agency Moody’s holds a more pessimistic view, at 2.5 percent this year and 2.3 percent next year. International institutions mentioned a prolonged trade war between the United States and China posing a threat for Korea’s export-driven economy.

Analysts see the latest hike as evidence that the BOK is prioritizing economic stability.

“The fact that the central bank moves up the rate in times of lower economic indicators shows its commitment to stabilizing the financial markets,” said Koo Hye-young, an analyst at Mirae Asset Daewoo. “The future rate decision will depend on the growth rate of household debts and whether the ratio will be lowered to the income level growth.”

Kim Sang-hoon, an analyst at KB Securities, predicted the BOK will stick to a freeze throughout 2019.

“KB Securities expects the rate to be held in 2019 because an economic downturn will deter BOK members from hiking the rate,” Kim said.