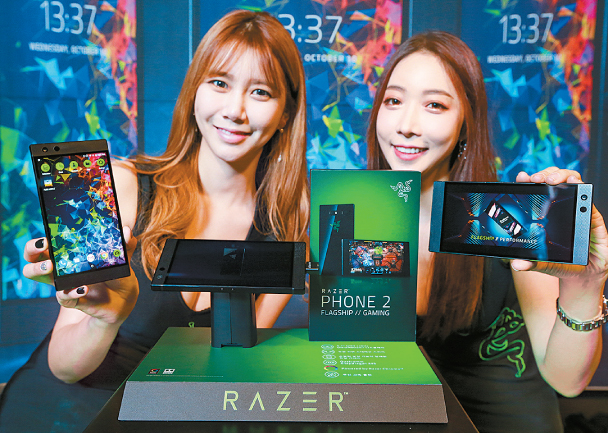 Models pose with the Razer Phone 2, which was unveiled for the Korean market on Friday. The smartphone is targeted at gamers and is optimized for playing games and watching videos. [RAZER]

Razer, a Singaporean gaming gadget company, unveiled the Razer Phone 2 - a smartphone specifically designed for gaming - on Friday in Seoul.

Korea is the fourth-largest gaming market in the world with more than 28 million game users, according to the company.

The Razer Phone 2 is equipped with a 5.7-inch display and offers a 120 Hz refresh rate, allowing users to enjoy mobile game with less delays and disconnections. The upgraded refresh rate helps the touch screen to react more precisely to user demands, according to the company.

The screen is 50 percent larger than its previous version - the Razer Phone 1 - which launched last year.

The Razer Phone 2 comes with a 400mAH battery which allows the phone to play games for 10 hours.

Playing mobile games is not the only entertainment available on the Razer Phone 2. It is also optimized for watching videos.

The company said the new phone includes Dolby Atmos technology in its dual speakers that are equipped on bezels both on the top and bottom of the devcie, providing a richer sound.

In terms of camera, the Razer Phone 2 is equipped with a dual camera on the back - a wide-angle lens and telephoto lens - that offer 12 megapixels each. The front of the phone has an 8 megapixel camera.

To optimize the display, Razer teamed up with popular games including PlayerUnknown’s Battlegrounds, Rival: Crimson x Chaos and Marvel’s Future Fight, among others.

The Razer Phone 2 will go on sale on Dec. 4 in Korea in partnership with local distributors All Life Technology and CJ Hello.

“Razer was able to pull off a huge success last year with Razer Phone 1 by paving a new sector in the smartphone industry,” said Min-Liang Tan, CEO of Razer in a written statement Friday. “The new Razer Phone 2 will help us set a new standard in the gaming industry.”