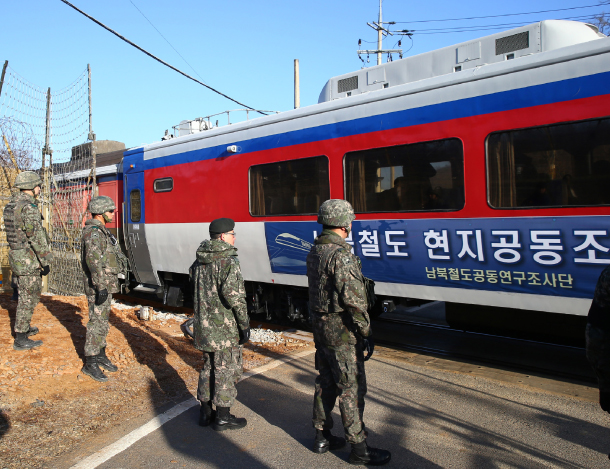 A South Korean train, carrying 28 government officials and railway experts, passes through the demilitarized zone (DMZ) in Paju, Gyeonggi, on Friday. The train is running on a track that leads to Kaesong, a North Korean city near the border with the South, to start a joint survey with Pyongyang on North Korean railway systems. [NEWS1]

A South Korean train carrying 28 government officials and railway experts departed for North Korea on Friday morning to start a joint survey with Pyongyang on North Korean tracks, a major step in a cross-border infrastructure project aimed at modernizing North Korean train lines and connecting them to the South to aid Pyongyang’s economic development.

The railway survey marks another follow-up to the Pyongyang Declaration signed by South Korean President Moon Jae-in and North Korean leader Kim Jong-un in late September during their third summit, in which they agreed to pursue “substantial measures” to develop the nations’ economies in a “balanced manner.” Moon and Kim specifically agreed to hold a tape-cutting ceremony by the end of this year to mark the beginning of an inter-Korean project connecting roads and railways between the two countries.

Friday’s start to the railway survey came a month later than the date both Koreas initially agreed upon in a high-level meeting in early October. That original plan was botched by Washington’s reluctance to lift sanctions on the North until last week, when it finally gave the green light. The UN Security Council granted the South sanctions exemptions to carry fuel and other equipment into the North for the survey. Seoul has stressed that actual construction work to modernize North Korean train lines will “be carried out along with progress in North Korean denuclearization.”

Before the South Korean train headed for the North on Friday, a farewell ceremony was held at Dorasan Station, just south of the border in Paju, Gyeonggi. Politicians and high-level government officials from the Unification Ministry and the Ministry of Land, Infrastructure and Transport traveled with the 28 South Korean surveyors from Seoul Station, central Seoul, to attend the event. From Seoul Station to Dorasan Station, they took the same train that went into the North.

“Peace on the Korean Peninsula will solidify and both the South and North will prosper together as our railways link as one in the future,” Unification Minister Cho Myoung-gyon said in a congratulatory speech.

Transport Minister Kim Hyun-mi said the farewell ceremony signified the beginning of inter-Korean co-prosperity and a “catalyst expanding the economic territory of the Korean Peninsula, which had been isolated like an island, to the Eurasian continent.”

Those who weren’t part of the South Korean survey team got off the train after the ceremony and headed back to Seoul. The South Korean train was composed of a locomotive and six other cars that went into the North to reach Panmun Station in Kaesong. The six cars included quarters for sleeping and offices as well as storage for fuel, drinking water and a generator. Seoul took 55,000 liters (14,529 gallons) of diesel, a UN-sanctioned item, to the North for the journey.

Through Dec. 5, the South Koreans will team up with North Korean officials and experts to look at 400 kilometers (249 miles) of tracks along the western coast from Kaesong, just north of the inter-Korean border, all the way up to Sinuiju, near the border separating North Korea and China. On the eastern coast they will study 800 kilometers of North Korean tracks from Anbyon County, Kangwon Province, to the northeastern edge of the Tumen River.