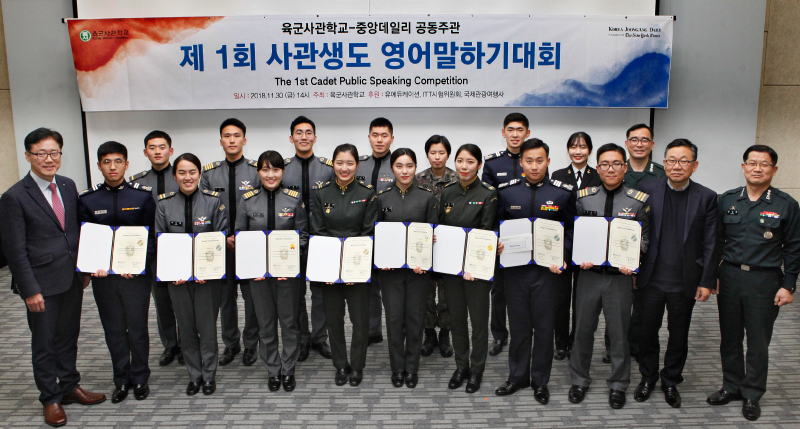 Winners of the 1st Cadet Public Speaking Competition gather on stage after the awards ceremony held at the Korea Military Academy (KMA) in Nowon District, northern Seoul, on Friday. Ryu Kwon-ha, chief executive officer of the Korea JoongAng Daily, stands far left, and Jeon Seong-hyeon, director of academy affairs at the KMA, stands far right. The JoongAng Daily and the KMA co-hosted the event, in which cadets from the military, naval, air force and nursing academies had to give a five-minute speech in English on how cadet life has changed the way they think and act. [PARK SANG-MOON]

The contest, co-hosted by the KMA and the Korea JoongAng Daily, was the latest project between the university and the paper to boost cooperation in English education. Both sides signed a memorandum of understanding toward that goal a month ago.

Cadets were given five minutes to explain in English how cadet life has changed the way they think and act in front of judges from the KMA, the Korea JoongAng Daily and the Committee of ITT.

The Grand Prize went to Lee Ha-min, a senior at the KMA, who explained how she managed to go from denying others’ thoughts that were different from her own to accepting those ideas through her four years at the university. Lee Jeong-yeon, a sophomore at the Republic of Korea Naval Academy, and Yang Eun-ju, a sophomore at the Korea Armed Forces Nursing Academy, both went home with the Gold Prize.

Winners of the Participation Prize were Kwak Ji-hyeon, a junior at KMA; Jeong Ji-hee, a sophomore at the Korea Armed Forces Nursing Academy; and Kang Min-soo, a senior at KMA.

Winners of the grand and gold prizes will be invited to the Korea JoongAng Daily’s annual Public Diplomacy Night next Wednesday in Gangnam District, southern Seoul, where Seoul Mayor Park Won-soon will give a presentation on public diplomacy to a crowd including ambassadors and their spouses.

The contest was sponsored by U Education, the Committee of ITT and the International Tour Travel Agency. The cadet public speaking competition will be held annually. Cooperation between the Korea JoongAng Daily and the KMA goes back to mid-September, when junior cadets majoring in English visited the media company’s newsroom to learn about journalism.