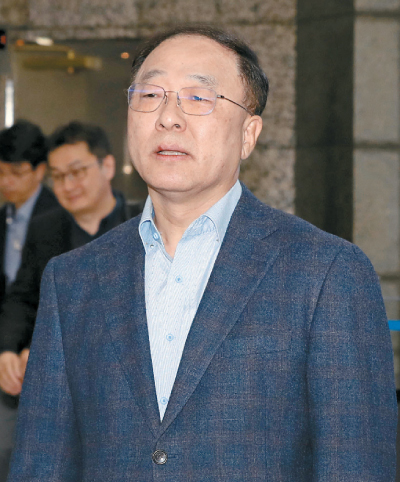 Finance Minister nominee Hong Nam-ki outlined his stance on major economic issues, including tax and wage policies, on Sunday ahead of a hearing to confirm President Moon Jae-in’s appointment on Tuesday.

The nominee advocated an increase in property tax and a cut in transfer tax in an answer to National Assembly lawmakers.

“To effectively manage the real estate market, property tax should be increased in the mid to long-term while transfer tax needs to be lowered,” he stated.

The dual approach, a direction also taken during the former Roh Moo-hyun administration, is aimed at putting pressure on owners with multiple houses and, at the same time, boosting real estate transactions through a reduction in the transfer tax.

Hong struck an egalitarian tone in explaining the need to raise property tax with a cautious approach toward the transfer tax cut.

“Globally, Korea has a relatively low property tax burden. But the lower ratio goes against the principle of tax fairness,” he said, “Still, we need to carefully look into the reduction of acquisition tax, consider its impact on regional governments’ budgets and resource distribution among regions.”

Hong assessed that the current corporate tax level is appropriate, saying that neither an increase nor a decrease is necessary.

The notion of income-led growth will continue to take center stage during his term despite the controversy surrounding its effectiveness.

“We need to keep [income-led growth] in order to address distortion in income distribution, the widening gap between the rich and poor and deteriorating social mobility,” he said.

The president’s income-led growth initiative, a measure aimed at stimulating the economy by raising low-income wages, invited a backlash after the steep rise in the minimum wage was accused of putting a strain on employers and companies, leading to less hiring and investment.

In response to the criticism, Hong vowed to adopt the policy more flexibly while acknowledging that a steep minimum wage hike affects the job market in the retail and accommodation sectors.

“We need to adjust and substitute certain policies through communication with the market and by reviewing [changes to see] if they cause negative effects,” he stated.

Asked if he intends to delay the implementation of next year’s minimum wage increase, Hong answered “it is impossible because the stipulated effective date is stated as Jan. 1.”

The nominee also touched upon thorny issues such as regulation on cryptocurrency, hinting that the tough stance will continue.

“Taxation on cryptocurrency is under discussion in cooperation with the National Tax Service and other related government agencies,” he said, “We plan to come up with detailed results by consulting other countries’ cases and infrastructure for taxation.”

In an assessment of the current economic situation, Hong noted that Korea’s economic growth has been weakened.

“Korea’s recent economic indicators are mixed. Jobs data and investment are weak, but exports and consumption have stayed sound, he said, “But in general, the growth trend has been weakened.”

He added that the situation won’t get better in the short term, warning that a tough year is ahead.

Hong will replace the incumbent minister, Kim Dong-yeon, once he passes the confirmation hearing.