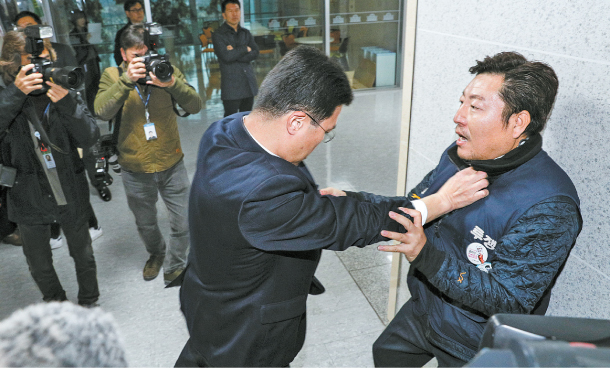 A member of a credit-card workers’ union tries and fails to enter the meeting hall at the National Assembly in Yeouido, western Seoul, where the ruling Democratic Party announced 2019 cuts in card commissions on Nov. 26. [JOONGANG ILBO]

A reduction in credit-card commission rates is casting a dark shadow over the future of domestic card companies as the move is expected to reduce profits by hundreds of billions of won.

To offset the anticipated losses, card companies could be forced to cut benefits offered to card users and possibly even lower their headcounts.

Businesses with annual revenue under 3 billion won ($2.65 million) will qualify for card commission rates below 1.6 percent from next year, according to the announcement of the new rates last Monday.

Businesses with turnovers of 3 billion won and under account for 93 percent of all establishments that accept credit and debit cards in Korea. Currently, only those earning less than 500 million won, or 84 percent of businesses, qualify for such low rates.

“It’s clear that the changes made this time will hurt not only card companies, but also small business owners and consumers as well,” said a representative from a union of credit card workers following the announcement on Monday. “We are ready to go on a general strike and fight the government.”

“The card industry is in shock because the commission cuts were a lot larger than expected,” said a spokesman for the Credit Finance Association, with a membership that includes all eight domestic credit card companies - KEB Hana Card, Lotte Card, Samsung Card, Shinhan Card, Woori Card, KB Kookmin Card, Hyundai Card and BC Card.

With card companies’ “finances worsening by day, we are worried and fearful of how to counter the effects of the cut,” the spokesman added.

The credit card industry performed poorly in the third quarter, reporting a 4.0 percent decline in combined net profits compared to the previous year. It was even worse in the first half of the year, when the industry reported a 31.9 percent fall in net profit year-on-year.

Adding fuel to the fire, the government is preparing to launch its own credit card-free payment service by mid-December, heightening competition in the market.

Korean card companies are scrambling to maintain profits by cutting costs and searching for other sources of profit.

While the government lowered commission rates to help small business owners, the cut is expected to bring billions of won in losses for credit card companies.

According to the Financial Services Commission (FSC), the revision will result in a decline in credit and debit card commissions by 800 billion won from next year. That is equal to around 7 percent of the total 11.7 trillion won in profit that card companies earned from commissions last year.

Analysts believe that the cut is too large, given that around half of card company profits are estimated to originate from commissions.

“Profits from credit card processing fees account for around 44.9 percent of card-company operating profits,” wrote Lee Nam-suk and Yoo Seung-chang, both analysts for KB Securities, in a report. “We expect profits to decrease by 3.9 percent on average for each company.”

“The total size of credit-card commission cuts for 2019 is larger than that of 2016. In that year, the reduction in commissions was 670 billion won,” according to a report from Nice Investors Service. “Compared to before, there are now more negative external factors like decelerating card usage, rising interest rates and a depressed economy that will make short-term loss of profits inevitable.”

The FSC believes that the companies will be able to cope with the losses in card-commission profit by cutting down on marketing costs to “reasonable levels,” arguing that large businesses earning 50 billion won or more a year are the main beneficiaries of marketing activities. It also announced it would discourage them from offering excessive benefits, like discounts and interest-free monthly installment plans.

“The government is trying to help business owners cope with the minimum wage by cutting commission, but that’s going against the ideals of a free economy,” said a manager at a card company. “It’s also questionable why we have to subsidize businesses earning 50 billion won a year.”

This is not the first time that the Moon Jae-in administration has pursued policies to help out business owners at the expense of card companies. The administration broadened the range of businesses that qualified for card commission discounts last July, and pushed down the value-added network (VAN) fees for convenience stores and grocery stores this July as well.

Some believe measures that eat into card-company profit are responsible for their poor performance this year. Not only did year-on-year profits decrease on average, but card companies have been scaling down on their workforces.

Earlier this year, some 200 Shinhan Card employees and 20 KB Kookmin Card employees signed up for voluntary resignation, and Hyundai Card is currently reviewing the possibility of downsizing as well. 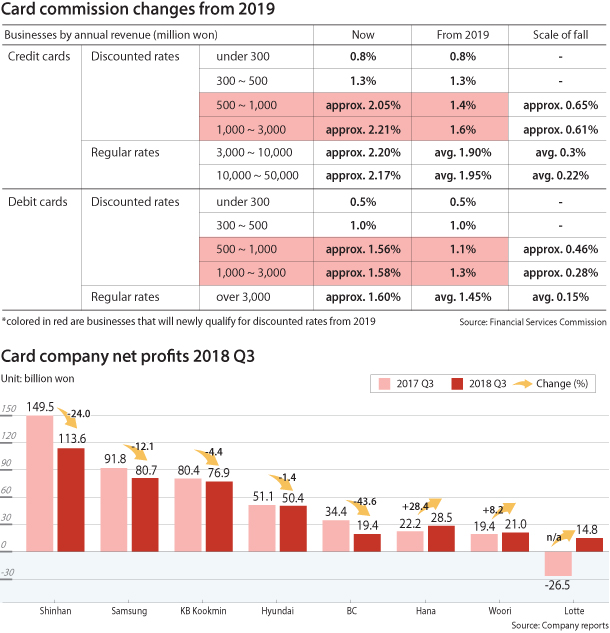 The upcoming launch of a new government-backed payment system poses another major challenge to card-company profitability as well.

Seoul Pay is a new QR code-based payment system developed by the Seoul Metropolitan Government due for launch this December. It is intended to help merchants in Seoul maximize profits by offering discounts pegged to the size of their annual revenue.

Businesses that have posted less than 800 million won in revenue in the previous year will not need to pay any processing fees. Card companies are worried that Seoul Pay will rise as a powerful competitor in an already saturated market.

“Because Seoul Pay is a government venture and has vested public interest, we predict that it will have a considerable effect on the payment market,” said a spokesman from the Credit Finance Association.

“It’s impossible for companies to offer customers perks to match those offered by the government. There’s really no other country where credit card companies give this much benefit to users.”

Seoul public officials have not revealed how many businesses have signed up for the payment service.

“It is still unclear how powerful the effects of Seoul Pay will be,” said an analyst who requested anonymity. “If as many stores and consumers participate in the numbers that the government is hoping for, card companies could face considerable losses in potential commission earnings.”

Card companies have been working to develop their own QR code-payment systems. BC Card launched the first QR code-based payment service by a card company in the country. BC, Shinhan and Lotte Card are said to be planning to introduce an integrated QR code-based service together by the end of the year.

Given the negative outlook on the domestic card industry, Korean companies are considering diverse measures - including overseas ventures - to cope with losses.

“The government is asking us to cope with losses of over 1 trillion won a year, but there’s no new business with which we can produce that level of profit in such a short time,” said a manager at a card company who requested anonymity. The FSC estimates that the size of credit card commission reductions including the 2017 expansion of businesses that qualify for discounts will total 1.4 trillion won.

“The only way we can make ends meet is by cutting down on marketing expenses and cutting back on the interest-free monthly installment plans that we’ve been offering to users. Our mission now is survival, not growth,” he added.

“At this point, our company is not even trying to find ways to find new sources of profit, but rather wait and see if the government will provide card companies room to breathe by lifting some regulations,” said a spokesman from another card company. “I believe the Credit Finance Association is collecting the opinions of different card companies and planning to present them to the government.”

“On Friday, the FSC released a report saying that it will ensure that the change in card-commission rates does not result in a sudden decline in consumer benefits,” he said. “The government went back on its word on Monday when it demanded that benefits be scaled down by a large margin.”

Some companies are trying to secure profits by expanding overseas, especially to Southeast Asia, where the card payment market is underdeveloped.

Lotte Card has the highest number of businesses abroad, with a company and an office in Vietnam, and companies in Indonesia and China. In November, BC Card announced a partnership with Vietnam’s Lien Viet Post Bank, the country’s postal bank.

Shinhan Card’s overseas businesses have been some of the more successful. In the first half of this year, Shinhan’s business in Kazakhstan, which facilitates installment payments on heavy equipment, reported 743 million won in profits. In the same period, the card company’s Myanmar business reported profit for the first time since its establishment in 2016.

“It usually takes companies four to six years of investment and infrastructure-building to make profit with overseas ventures,” said a spokesman for Shinhan Card. “We are focusing on emerging markets, where there’s a lot of room for growth.”

“The Association is actively trying to help credit card companies create new sources of growth and profit by strengthening their understanding of ways to expand abroad,” said a spokesman.

“With lower commission rates, credit-card companies will definitely experience stunted growth,” said Yoo Seung-chang, an analyst at KB Securities. “It will become necessary for them to find new ways to maintain profit levels, including overseas expansion.”