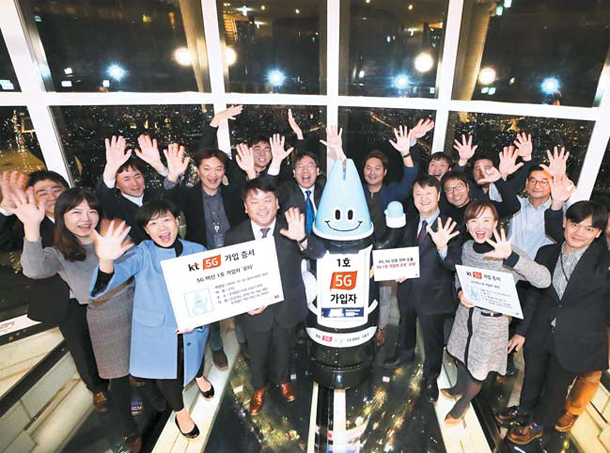 All three of Korea’s mobile carriers launched their 5G networks on Saturday, the first day of December, officially kicking off an era of the high-speed network.

SK Telecom started transmissions from its Bundang network management center in Seongnam, Gyeonggi; KT from its Gwacheon network control center in Gyeonggi; and LG U+ from Magok Science Park in western Seoul. All of the 5G networks operate on a 3.5-gigahertz (GHz) frequency band.

The network can currently only be accessed by corporate clients, not individual users. Businesses can use the card-shaped mobile routers to pick up the 5G network and convert it into super-fast Wi-Fi.

Individual subscribers are expected to be able to start using 5G from March, when smartphone devices supporting the new network will become available. Samsung Electronics is expected to unveil its Galaxy S10 smartphone as early as February and may come up with two different versions: one supporting LTE and one that works on 5G.

SK Telecom’s first 5G customer was Myunghwa, a product quality assessment firm in Banwol Industrial Complex in Ansan, Gyeonggi. The company is using the network to process ultra-high definition photos of auto components taken from different perspectives as the products are being moved on a conveyer belt. The images are transmitted using the 5G mobile router to a cloud server, where a high-performance artificial intelligence interface can instantly tell whether a product is faulty.

SK Telecom also began test operations of its 5G autopilot vehicles in Hwaseong and Siheung, both in Gyeonggi. The vehicles are able to exchange information about their status while on the road with a control center and traffic lights dozens of times per second.

KT celebrated the launch of its 5G network by having a robot as its first subscriber. The robot, called Lota, will be guiding visitors to the Seoul Sky observatory at Lotte World Tower in Songpa District, eastern Seoul.

“We chose Lota to show that 5G doesn’t simply mean a generational shift, but will become a platform that will innovate our overall lives and industry,” said KT in a statement.

KT plans to prioritize 24 major cities nationwide as well as key public transportation routes and university areas, where traffic demand is expected to be high, for 5G installation in the near future.

LG U+’s first corporate customer is LS Mtron, an industrial machine developer based in Anyang, Gyeonggi. The two companies have jointly developed a 5G remote-controlled tractor, the first in Korea. LG U+ said 5G-based remote-controlled technologies may minimize human engagement in risky working environments, such as the removal of mines and industrial waste disposal.