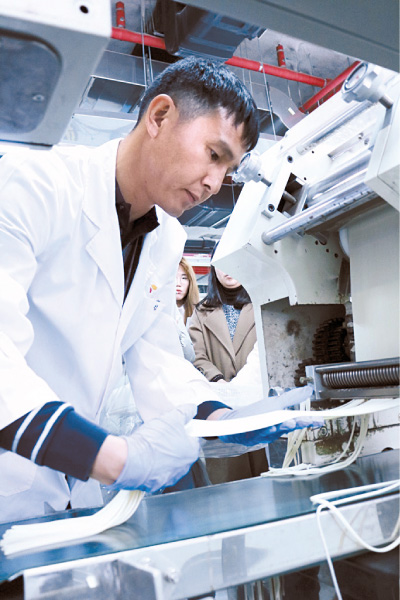 SUWON, Gyeonggi - Packaged ramyeon has dominated Korea’s instant noodle market for decades, with some of the most popular brands growing well beyond the country’s borders to become best-sellers around the world. That same dried, packaged formula may have worked for decades, but CJ CheilJedang is ready to try something new - frozen noodles.

Typically, ramyeon noodles are fried in boiling oil before being packaged. Frozen noodles, on the other hand, are boiled in water and immediately cooled.

The Bibigo noodles were both varieties of kalguksu, traditional flour noodles, while the Gourmet options were both jjampong, a seafood noodle dish popular at local Chinese restaurants.

A local leader in the home meal replacement category, CJ has a wide range of instant home meal dishes, but the frozen noodles category is expected to receive a particular push next year. Its first batch was the result of a one-year study by researchers that investigated noodles, garnishes and sauces in separate teams. They started from scratch, going on a nationwide tour of the country’s best kalguksu and jjampong restaurants with CJ chefs.

On Thursday, CJ invited the local press to its research center in Suwon, Gyeonggi, where the noodle studies took place. 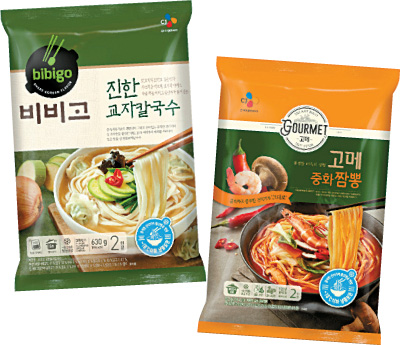 “Flour and starch from different countries and of different varieties produce different results - we studied each material to see which goes best with each noodle type and also devised the best mix ratio,” said Kim Sun-pyo, CJ’s head researcher for the noodle division. “The speed and duration of mixing also make a difference, so that was also part of the development process.”

After the dough is flattened multiple times it is cut and put straight into boiling water. Immediately after being boiled it is frozen. Kim explained that the speed of boiling and freezing is what makes each noodle softer on the outside and chewier inside.

Another point the researchers made an effort to differentiate with existing instant noodles was the garnish. Most garnish for instant noodles, including ramyeon, are dried vegetable flakes. CJ’s new products contain a block of frozen vegetables or seafood. Like the noodles, they are lightly boiled in water and rapidly frozen.

The entire process to make the sauce and garnish are as similar to the versions the researchers tasted at restaurants was based not only on tasting, but science - researchers used special tools designed to measure taste and texture.

“Our biggest question was finding a way to maintain the texture, the color of the vegetable garnish, and the processing to ensure that they last long,” said Shin Sang-myeong, who heads CJ’s team for noodle sauce development. “We eventually found the right method for each vegetable.”

For the sauce, CJ mixed extracts made with different chicken parts instead of boiling them all in one. Each chicken part made soups with a different taste and this made it easier for them to find the best mix ratio.

CJ’s move into frozen noodles is also in line with the company’s long-term goal to raise the popularity of Korean food worldwide. Its most successful global product at the moment is Bibigo dumplings, but earlier this month it acquired a major frozen food manufacturer, Schwan’s Company, in the United States, expressing ambitions to expand its global lineup of frozen food in the future.

“Schwan’s is a company that has strength in frozen food distribution in the United States, so we’re thinking of ways to create synergy between Schwan’s frozen food storages and Bibigo’s products,” said Shin Hyo-rim of CJ’s marketing team.

CJ will first export one of the four new releases - the Bibigo Spicy Mushroom Kalguksu - to the United States in January. Shin hinted that based on the feedback for exported local products, the company may consider using Schwan’s existing infrastructure to manufacture frozen noodles abroad.

In the meantime, CJ’s first strategic focus will be expanding sales in Korea. Compared to the 2 trillion won ($1.78 billion) ramyeon market, frozen noodles are a minor player with just 10 billion won in sales last year. The goal is to enlarge this to 200 billion won by 2020.

Kim said that the sector’s growth could be predictable using Japan as a model. Frozen noodles account for a little less than half the entire noodle market there.