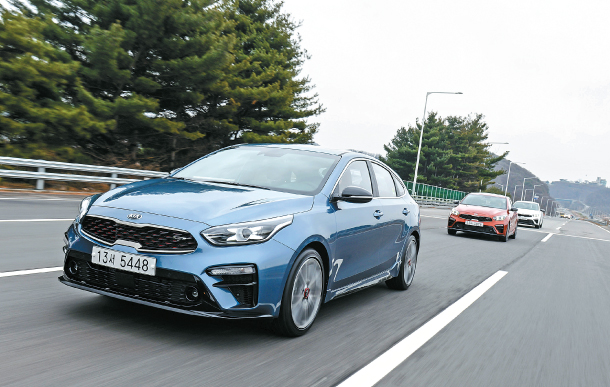 Across an 80 km (50 mile) drive from Namyangju to Paju in Gyeonggi on Nov. 22, the K3 GT zipped across a course that mostly covered highways.

Its driving performance was a far cry from the original commuter version as the vehicle’s acceleration responded instantaneously thanks to its 1.6 liter turbocharged engine. The GT responded to even the slightest pressure on the pedal, zooming to 180 kilometers per hour (112 miles per hour) with ease. Along with fast acceleration, the K3 GT rumbled when accelerating as the car’s electronic sound generator (ESG) added to the real sound from its new tuned dual mufflers, similar to the ESG included in Kia’s sports sedan, the Stinger.

Petrol heads will also appreciate the sporty D-cut steering wheel on the front-wheel drive, which produced accurate steering as the vehicle entered and exited corners and a natural feel when switching lanes.

While the fast GT may please driving enthusiasts with its performance, it doesn’t provide for the most comfortable ride.

At high speeds of 150 km per hour, the hatchback model produced some road and tire noise that soon became distracting. The sound from the ESG and the unwanted cacophony of warning beeps from its various safety features didn’t help with the situation either.

The vehicle also comes with tubular seats, which emphasize its racing theme and hold the driver in place during quick acceleration, but feel quite stiff on the passenger’s side.

The interior has a clean, simple look with red stitching on the front seats that accentuates the sporty aesthetic. But the car will likely tire passengers during long-hour drives due to its tough and hardy feel.

The sporty vehicle, however, maintains a competitive edge in safety as it comes loaded with a variety of smart features including forward collision warning and lane keeping assist in all its trims.

While the various beeps that come in a range of pitches may be obtrusive, the lane keeping and changing features worked perfectly during the drive, as the steering wheel shifted on its own to steady the vehicle and issued alerts whenever a car was nearby when switching lanes.

As for its exterior, the GT is a familiar offshoot of the original K3. It retains much of the original front design, but adds a touch of flair with subtle red accents in its signature Kia tiger-nose grille and 18-inch alloy wheels with an option of Michelin summer tires.

The vehicle also keeps in touch with the utilitarian side of the original model, marking a return to foldable back seats that provide spacious room for storage.

The original K3 has sold 37,125 units in the domestic market until October this year, 63 percent more than during the same period last year. The GT, offered either as a sedan or a hatchback, adds a sporty edge to Kia’s compact lineup, competing with Hyundai Motor’s high-performance offerings, such as the Avante Sport and the hatchback i30 N Line.

“The K3 GT incorporates a powerful engine and technology optimized for high-speed driving to strengthen the driving performance,” said Kwon Hyug-ho, head of domestic sales at Kia Motors at a media event prior to the Korea JoongAng Daily’s drive.

The competitive pricing puts pressure on Hyundai’s Avante Sport, which starts at 19.64 million won and the i30 N Line at 23.79 million won.