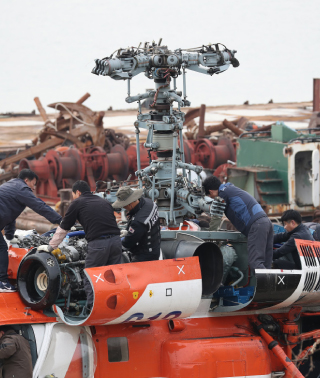 Mechanics on Sunday disassemble the firefighting helicopter that crashed Saturday morning after it was salvaged from the Han River. [YONHAP]

The Korea Forest Service (KFS) will host a memorial service today to honor a mechanic who died after one of its firefighting helicopters crashed in Seoul on Saturday.

The mechanic, a 43-year-old man identified only by his surname Yoon, was among three passengers operating a firefighting helicopter on Saturday morning when it crashed into the Han River near Gangdong Bridge in eastern Seoul.

The helicopter was trying to pump out river water to put out a fire on nearby Mount Yeongchuk when it plunged into the water.

The two pilots, a 57-year-old surnamed Kim and 47-year-old surnamed Min, both survived, though they were injured. Yoon, who was sitting in the backseat of the chopper, was transported to a hospital nearby after he was discovered unconscious, but he later died from cardiac arrest.

The reasons for the crash are still unknown.

Fire authorities recovered the helicopter from the Han River after the crash on Saturday afternoon and moved it to a nearby waterfront, where it will be dismantled through Monday. The chopper’s propeller was severely damaged, authorities said.

Once the disassembly is complete, the parts will be sent to the Aviation Accident Investigation Board’s headquarters in western Seoul, where they will be analyzed for possible mechanical defects.

The chopper’s black box was also recovered. Its contents will be analyzed to reconstruct the circumstances of the accident to determine whether the crash was caused by mechanical or human error.

The chopper was a KA-32, which has a water capacity of 3,000 liters (792 gallons). The KFS has 30 KA-32 helicopter models used for range of different purposes, like putting out forest fires or transporting materials.

A KFS spokesman said after the accident that the crashed helicopter was mechanically inspected in October, and that discernible defects had not been found during that test.

But the model, which was initially imported from Russia in 1997 for military use, has had a number of similar accidents in the past.

In 2009, a KA-32 chopper was conducting a practice firefighting operation when it crashed. The three people on board died.

Another KA-32 chopper made a crash landing in May last year when it hit a high-altitude power cable in Samcheok, Gangwon. The mechanic on that helicopter also died.

“We will do our best to rapidly determine the causes of the accident,” said KFS Deputy Minister Park Jong-ho. “We implore the people to also do their best in preventing forest fires.”

Yoon’s memorial service will be held at a funeral home in Incheon and will be led by KFS Minister Kim Jae-hyun.

A veteran helicopter mechanic, Yoon has worked on a variety of helicopters since 2007, his colleagues said. He will be buried at Daejeon National Cemetery with honors.