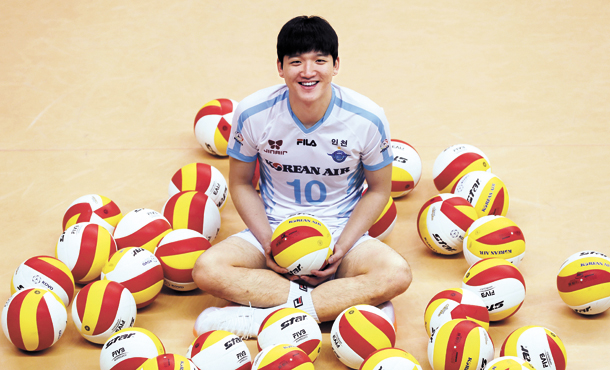 Jung Ji-seok of the Incheon Korean Air Jumbos was the first high school graduate to make a professional debut in the KOVO. He is likely to become the league’s top free agent at the end of this season. [BYUN SUN-GOO]

Jung Ji-seok of the Incheon Korean Air Jumbos is having the best season of his career.

Less than two months since the 2018-19 Korean Volleyball Federation (KOVO) season kicked off, Jung has already scored 201 points with 18 blocks in 12 matches, good enough to be ranked eighth in the league in terms of points. The Jumbos’ head coach, Park Ki-won, wasn’t lying when he called Jung “the superstar.”

Thanks to Jung’s performance, the Jumbos have been leading the league since the start of the season and now have nine wins and three losses, totaling 28 points as of Monday 6 p.m.

The big change to Jung’s game this season is his improved defense. In addition to his attacks and points, Jung is also 10th in digs, at 1.43 per set, and second in receives.

“I look at my personal statistics sometimes and I’m surprised by them too,” Jung said. “Since everyone on our team engages in attacks, I think I’m getting more opportunities.”

Jung started playing volleyball in second grade thanks to his father’s influence - Jung’s father used to play for a club volleyball team and served as a professional referee.

“When I first started volleyball in second grade, football was the more popular sport thanks to the influence of the 2002 World Cup,” Jung said. “Though I was also interested in football, I started volleyball because my father told me that he’d buy me snacks if I went to the volleyball court with him.”

Since Jung played as a setter, libero, center, left and right when he first started the sport, he learned the basic fundamentals of the sport better than other players. But the area he has most improved since joining the Jumbos is serving.

“I wasn’t the best player when it came to serving,” Jung said. “But after a one-on-one session with head coach Park, I improved a lot. He told me to just hit everything, even at deuce. Now I just make aggressive serves.”

Unlike most volleyball players in the KOVO - who go pro either during or after college - Jung turned professional right after high school, the first to do so.

“My father strongly encouraged me,” Jung said. “It is a little disappointing to miss college life, but I never regretted making an early debut on the professional league.”

By making his debut with the Jumbos at 18, Jung is now in his sixth season in the KOVO and will become a free agent player next year. Even before this season began, Jung’s young age and long career had all seven teams in the league talking about him as their top pick in the upcoming free agent market. As he is currently having the best season of his career, the 23-year-old is expected to have a busy schedule once the season ends.

During a media day event in October, when the head coaches were asked to pick a player that they want to add, all seven teams chose Jung.

“After this season, we want to bring Jung Ji-seok to our team,” said Shin Jin-sik, head coach of Suwon KEPCO Vixtorm.

“I’ve continuously made requests for Jung Ji-seok, but I think I need to give up on him because it’s going to be very competitive,” said Kim Se-jin, head coach of Ansan OK Savingbank Rush&Cash.

At the time, Jung said he was worried that he may not live up to the high expectations.

“I was worried that the expectations may turn into disappointments,” Jung said.

Jung’s success at a young age didn’t just come from playing in more games. Even when he’s not training on the court, he spends all night watching clips of his favorite players and tries to learn from them.

“On days when we lose a game, I spend all night watching clips of the game,” Jung said. “I want to learn different techniques. I think volleyball will be more fun if I have a variety of techniques. I just want to become a really good volleyball player.”

The 2018-19 KOVO season is divided into six rounds. Since there are seven teams in the KOVO, each team plays six games in each round, the entirety of which is set in a round robin format. Throughout the regular season, which runs until March 14, each team plays 36 games.