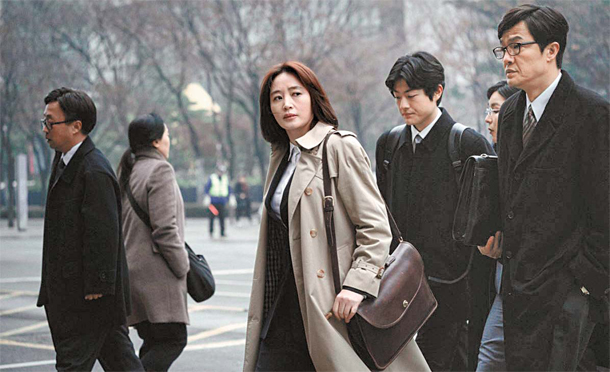 A new release, “Default,” broke the long-running success of “Bohemian Rhapsody” to debut at the top of the weekend box office. [CJ ENTERTAINMENT]

Starring Kim Hye-soo, Cho Woo-jin and Yoo Ah-in, “Default” is a story that deals with the International Monetary Fund (IMF) bailout of Korea in 1997.

It is directed by Choi Kook-hee, director of 2016 bowling movie “Split.” “Default” sold 1.07 million tickets at 1,168 screens from Friday to Sunday, according to data provided by the Korean Film Council on Monday. It generated 41.9 percent of weekend sales revenue.

Set in 1997, just a week before a wave of bankruptcies that overwhelmed the country and led to IMF intervention, the movie depicts the diverse range of opinions among the leaders and the experts. While the vice minister of finance (played by Cho) sees the bailout as an opportunity to restructure the entire country, others, like Si-hyeon (Kim), a senior analyst at the Bank of Korea, warns government officials of the consequences of the bailout.

The movie also tells the story of a banker-turned investment consultant (Yoo), as well as that of an owner of a small factory (Huh Joon-ho) who falls into a massive debt. Vincent Cassel appears as the IMF’s managing director.

In its fifth weekend, “Bohemian Rhapsody” sold 800,000 tickets at 1,103 screens. The movie, which focuses on lead singer Freddie Mercury of the British rock band Queen, became the best-performing music movie in Korea ever as of the weekend, with more than six million admissions.

Following the rave response in Korea, Queen’s guitarist Brian May sent a video thanking Korean fans and expressed his hope to perform in Korea one day.

At a distant third was action title “Unstoppable.” Starring Ma Dong-seok, the film sold 224,000 tickets in its second weekend. Ma’s fifth title of the year revolves around an ordinary husband (Ma), who abruptly turns into an aggressive fighter after his wife (Song Ji-hyo) gets kidnapped. 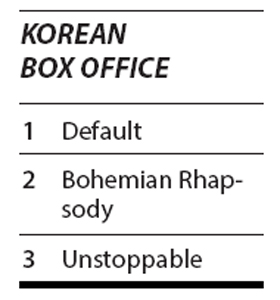 In its third weekend, “Fantastic Beasts: The Crimes of Grindelwald,” slid three spots down to land at sixth. The follow-up to 2016’s “Fantastic Beasts and Where to Find Them,” directed by David Yates, has sold a total of 2.3 million tickets.

This is far below the record of the first “Fantastic Beasts” movie, which sold 4.66 tickets in 2016.