Automated Korea is no country for old people

Automated Korea is no country for old people 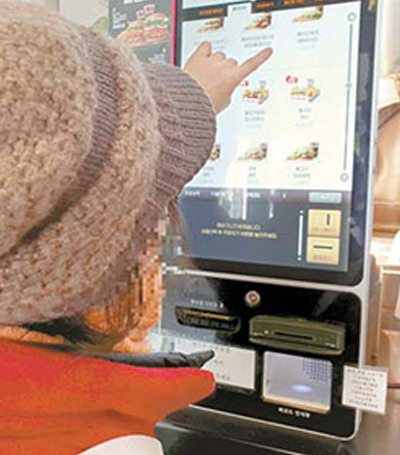 A woman in her 60s orders a meal through an electronic kiosk at a fast food restaurant in Gyeonggi. She took five minutes to select her meal and pay. [LEE ESTHER]

The elderly are being left behind as automation and mobile technology take over the daily lives of Koreans, adding to the growing alienation of senior citizens as the country ages at a breakneck pace.

Kim Soo-kwang, a 72-year-old man who spent two decades of his life in Seoul before returning to his hometown of Busan, says he still visits the capital by train once or twice a month to meet old friends. For younger passengers, getting train tickets is a breeze - all it takes is five minutes on Korail’s mobile application or website. But Kim says he doesn’t know how to use phone applications on his smartphone, and hesitates to ask his 45-year-old son every time he needs to buy a ticket.

Instead, days before he leaves for Seoul, Kim takes an hour-long trip from his home to Busan Station to buy his tickets in person. “When you’re old, it’s best not to go places,” he glumly chuckled.

Kim is not alone as an elderly person who struggles to live a regular life in today’s Korea. Social and public services in everything ranging from banks to fast-food restaurants are adopting digital technology to replace human labor.

According to the Ministry of Science and ICT’s “2017 report on digital information disparity,” only 58.3 percent of the population over 55 meet the minimum capability level in terms of IT use. A digital environment may feel normal for young people, but for many older folks, this so-called convenience makes everyday tasks extremely difficult.

Even public agencies have been quick to dispense with traditional forms of public services in favor of a digital approach.

Decades-long tennis enthusiast surnamed Jang said she quit the sport because of the hassle involved in reserving a local tennis court. Publicly-managed athletic facilities in Seoul, such as tennis courts, are operated on an online reservation-only basis, but for old people like Jang, the procedure is too complicated to manage.

“It both angers me and makes me envious that younger people in their 40s and 50s use the court like they pay rent for it,” Jang said. “I was tired of asking people to reserve the courts for me, so I just quit.” 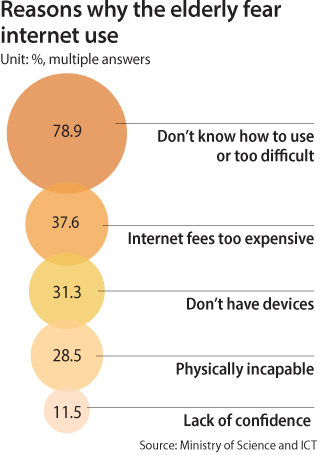 “The older you get, the less capable you are of learning new skills,” said Kim Ki-woong, a mental health professor at Seoul National University Bundang Hospital. “It takes the elderly a long time to learn new digital devices, and even when they do, these products are often personalized for a younger person’s physical and responsive traits.”

A lifelong fan of the professional baseball team Hanwha Eagles, Lee, 60, bought a scalped ticket to watch the team play the Nexen Heroes in the first round of the postseason playoffs. The ticket cost three times the price of a regular one.

Lee had tried to buy the ticket online but failed. They sold out in just minutes.

“Since I am accustomed to smartphones and computers, I thought the reservation would be easy, but it turns out I was wrong,” he said. “Even young people have difficulty buying them.”

The day of the game, Lee arrived at the stadium hours in advance to buy the tickets at the counter. They had none. According to a spokesman from the Korea Baseball Organization, postseason tickets are all sold online and are only sold on-site when there are some left over.

Lee said he knew that buying scalped tickets was wrong, but his desire to watch a fall postseason game was too strong. He said he felt bitter when he couldn’t get a single ticket over the counter.

At restaurants and cafes, the growing popularity of electronic kiosks is making old people feel increasingly isolated. Lee Hyeon-sook, a 63-year-old woman from Anyang, Gyeonggi, said she no longer goes to her favorite cafe in her neighborhood after it installed an electronic kiosk. “I tried to order through the machine, but it just kept going back to the original page because I took too long,” she said. “The people in line behind me kept giving me the evil eye, so I just gave up.”

The accessibility of such new technology by elderly people is surprisingly low, experts said. “Even older people who say they are accustomed to IT products generally just know how to read the news online or chat on a mobile messenger app,” said Kwak Keum-joo, a professor of psychology at Seoul National University. “In terms of actual, practical services like online bank transactions or ticket reservations, they have no clue.”

Kwak said that older people who are alienated from digital technology can feel like society is ignoring them, building up antipathy that can lead to generational conflict.

Banks are also cutting down on human bank tellers and supplanting them with mobile app services. A Citibank branch in Mapo District, western Seoul, on Tuesday shut its bank teller windows and put up a sign saying the branch was now only dealing with digital transactions.

“Even among the elderly, those who live alone or with other old family members fall behind in terms of their capacity to use digital products,” said Hwang Yong-suk, a media communications professor at Konkuk University. “This disparity can lead to growing differences in the quality of life.”

Hwang added that digital education for the elderly is desperately needed.

Another expert, Seok Jae-eun, a social welfare professor at Hallym University, said the digital accessibility problem among the elderly will gradually decrease as the current middle-aged population - Korea’s baby boomers - age. “It is important to create quotas for the current elderly population in terms of social services and expand digital education for them,” he said.