Believe it or not, Kim Byung-hyun’s still going

Believe it or not, Kim Byung-hyun’s still going

Submarine pitcher Kim Byung-hyun’s love of baseball has seen him bounce from country to country in his bid to continue playing. This year he’s ended up on the mound in Australia, pitching for the Melbourne Aces. 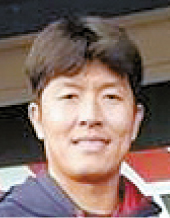 During the Aces’ game against Geelong-Korea on Nov. 29, Kim made his Australian Baseball League (ABL) debut. Kim appeared as the team’s second pitcher when Melbourne was down 1-3 at the top of the sixth inning.

Kim grounded out the first batter and struck out the next two to toss a scoreless inning. Despite his best efforts, Melbourne lost the game 1-3.

Kim appeared again in the last of the three-game series against Geelong-Korea on Saturday and tossed another scoreless inning. This time, Melbourne won the game 18-12.

By finishing the series with a win, Melbourne has become the leader in the ABL Southwest division with nine wins and three losses.

This was the first time in almost two years that Kim has pitched for a professional team. The last time he played in an actual game was in August 2016, when he started in the Futures League game against the KT Wiz. At the time, Kim was signed with the Kia Tigers.

Over the past two seasons, Kim has been an active pitcher without a club to play for. Once he was released by the Tigers in 2016, Kim was forced to hang up his gloves until October 2017, when he joined Gigantes del Cibao of the Dominican Winter League. That didn’t last long either, as he only appeared in practice games. Right before the season opener, Kim left the team.

Although it seemed pretty clear that Kim was no longer able to sign with a professional team, he pointedly never said he had retired at any point since leaving the Tigers.

After being slowly forgotten by the baseball fans, Kim reappeared in the major league in April to throw the ceremonial first pitch when the Arizona Diamondbacks, his old team, faced the Los Angeles Dodgers. Rather than his traditional underhand pitch, Kim tossed an unusual overhand pitch to the catcher.

“After making the ceremonial first pitch, I dreamed of playing baseball a lot,” Kim said during an interview with the JoongAng Ilbo, an affiliate of the Korea JoongAng Daily, in June. “I wanted to retire when I was at my best, just like manager Sun Dong-yol. I started to think that I can retire anytime, but that I just can’t continue my professional career once I retire.”

Kim is one of the most decorated players in Korean baseball history. Rather than heading straight to the KBO after high school, Kim attended Sungkyunkwan University until 1999, when he signed with the Diamondbacks.

Kim played five seasons with the Diamondbacks, from 1999 to 2003, and in 2001 he helped the team win the World Series. Kim got his second World Series ring when he joined the Boston Red Sox in 2004. Although Kim wasn’t included in the Red Sox’s World Series roster, he still got the ring.

Still, Kim is the only Korean player to have won an MLB World Series ring.

After the 2007 season, Kim continued his career in the United States by playing in the minor leagues. When he was released, he signed a one-year deal with the Tohoku Rakuten Golden Eagles of the Japanese Pacific League. As his career in Japan wasn’t too successful, Kim returned to Korea and played for the Heroes and the Tigers.

Although Kim wasn’t able to end his career on a high, he was determined not to give up because he loves playing baseball.

The ABL is considerably less competitive than the KBO. Since the Australian league has a shorter season and is during the winter, young pros from the Japanese league, former major and minor leaguers often join.

This also applies for the league’s only Korean team, Geelong-Korea. The majority of the team’s players were released by their KBO teams at the end of the 2018 season.

The ABL may seem like a small stage for a baseball player of Kim’s stature, but he’s not complaining as he just wants a reason to play.

Shortly after Kim finalized his contract with Melbourne, he also received an offer from Geelong-Korea, led by manager Koo Dae-sung. Since the team is entirely made up of Korean players, it might have been an easier transition.

“I’ve already made a verbal commitment to Melbourne manager Jon Deeble and I wanted to spend my remaining career quietly,” Kim said.