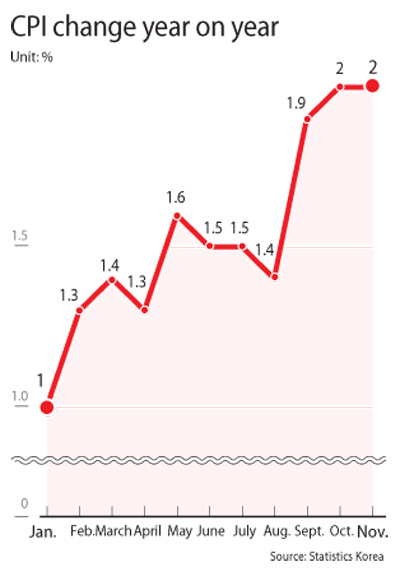 According to Statistics Korea, consumer prices in November rose 2 percent year-on-year. It also reported a 2 percent rise year-on-year in October.

While consumer prices were up in all categories - from processed goods to utility costs and services - the prices of agricultural and fishery goods rose significantly, increases that affect the dinner tables of average households.

Prices of a number of key products grew especially fast. Rice, a staple of most Korean households, surged 23.8 percent. Tomatoes rose 44.4 percent. Meat is cheaper than it was a year ago, with pork prices down 4.4 percent. Egg prices fell 14.3 percent.

Overall, consumer prices in November were down 0.7 percent from the previous month.

“The overall inflation is still within target range of 2 percent,” said Jang Bo-young, head of the Ministry of Finance and Economy’s price policy division. “However, due to the effect of the heat [in summer] and the relatively lower prices a year ago, [consumer price rises] September through November are slightly higher than those in the first eight months of the year.”

Agricultural products are not alone in quickly becoming more expensive. The CPI rate was high in other categories as well. Processed goods were up 1.5 percent year-on-year, gasoline was up 5.1 percent and diesel 9.1 percent. Utility prices were up 1.5 percent, and natural gas, which is used for cooking and heating, rose 3.5 percent.

The latest consumer price report is fuelling concern as it demonstrates that the living conditions of lower-income households, despite government efforts, have been worsening.

Last week, the Bank of Korea raised its benchmark rate from 1.5 percent to 1.75 percent, the first increase in a year, a move that is also adding to the burdens of the average household.

The Finance Ministry said the government is currently working on stabilizing prices by releasing stockpiled agricultural products. It added that the government will work with the private sector so that the recent decline in international crude prices will be reflected in the prices of goods purchased in Korea.